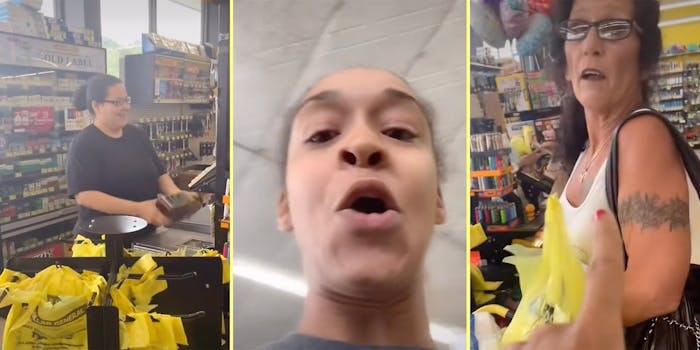 ‘What you said was very ignorant’: TikToker confronts transphobic cashier at Dollar General

'How do you know that I'm not trans, and I didn't take that very personally?'

A TikToker encountered a particularly disturbing comparison in a Dollar General involving trans people and vaccinations and let several store employees and random customers have it in an epic rant shared on the platform.

The video comes from the @mortuaryschool101 account, in which the TikToker mostly documents their mortuary students but found a little bonus homophobia to share.

As the creator captioned the video, “This Dollar General cashier & customer were making the loudest rudest comments about LGBTQ+ & I just couldn’t.” The TikTok captures @mortuaryschool101 reacting to those comments and then getting the reactions of their indignation from the people around them.

“You do need to be educated because what you said was very ignorant,” the TikToker started.

@mortuaryschool101 then alluded to the comparison that set them off, asking the Dollar General employee they were confronting, “How do you know that I’m not trans, and I didn’t take that very personally?” The TikToker went on to scold the person who made the statement, dismissing someone trying to interrupt in the process by saying, “I’m not talking to you; mind your business.”

The employee then apparently tried to backpedal a bit from what she was saying, asserting that she said something along the lines of, “If a girl can identify as a boy, I can identify how I want.”

The TikToker then brushed aside a shopper who was trying to interject and then turned the video camera on the employee who irked them.

“This ignorant ass woman just made a very disheartening statement, in comparing being vaccinated to trans people,” they said, training the camera on the perplexed employee. “How rude!”

“EVERY ALLY SHOULD TAKE NOTE,” a commenter said in all caps with clap emoji. “Thank you for holding people accountable.”

The Daily Dot has reached out to @mortuaryschool101.