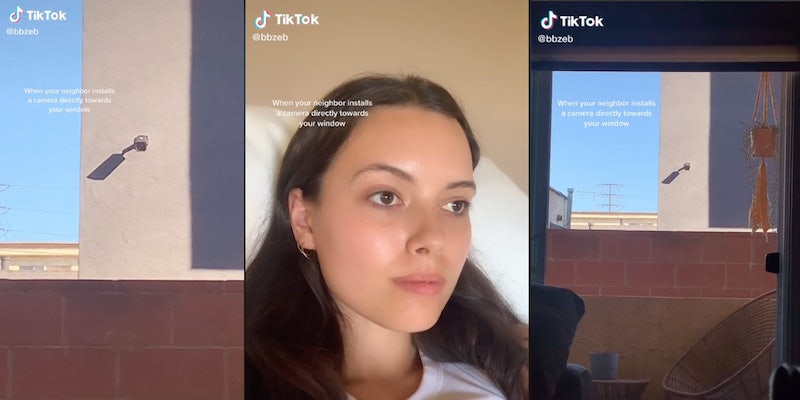 Commenters gave suggestions on how to block the camera's view.

A woman recently posted a TikTok showing her neighbor’s security camera pointing directly into her home, sparking debate on whether the act is legal or not.

On Friday, @bbzeb posted the video with the overlay, “When your neighbor installs a camera directly toward your window,” and clips of her looking out her window at the security camera which appears to be mounted on the side of her neighbor’s house and aiming right at her. The video has over 38,000 views and 1,400 comments.

People were quick to comment that the neighbor was not only wrong, but possibly acting illegally by invading her privacy in that manner.

“That’s so illegal, by law he has to point it away from your window,” commented @imaandwilliams.

“It’s illegal to record into someone else’s home. My neighbors got in trouble for spying on the old lady next to them,” wrote @beanandsheep.

“That is 100% illegal when pointing at your window like that 😳,” wrote @ouchmyshans.

However, the laws around personal security cameras vary by state and can get a little blurry when it comes to intent and scope. In most states, it is legal to have a security camera mounted on your house that is pointed at another house if it covers a “broad area,” according to reolink.com. It is also allowed as long as it is in “lawful use.”

“As long as the recorded videos don’t infringe on your privacy and are for lawful [purposes] only (like monitoring suspects or [preventing] package thefts at the front door), it is legal for your neighbor to point a security camera at your property in plain view,” the website states.

Some TikTokers noted that it actually may not be illegal depending on the circumstance.

“If it’s a wide angle lens it may be ‘pointed’ at you but it could be taking in a huge range-making your window very tiny,” commented @s2c341.

“My neighbor put up cctv filming me in the garden & windows. Police said they can’t do anything as everyone has a right to protect their property 💔 ,” said @xrxnxshxhh.

The Daily Dot reached out to the TikToker via comment section but did not hear back by press time, therefore it is unclear what state she lives in, although past videos are filmed from New York City.

Others offered some legal (and illegal) options to fighting the intrusion, even if police or the justice system can’t intervene.

“Lol get the reflective tint for your window 😏 he won’t even be able to view the camera,” wrote @asilversiren.

“My first thought was put a cardboard cut out of danny devito in the window,” offered @sophacat1103.

“My neighbors did that so randomly during the day i’d open my blinds and just stare, and they moved it 😂,” said @klarksie.

“Laser pointer will fry it (the green one),” said @maxhuskins.

“For the ppl saying use a laser pointer/paintballs; in some areas you will get in trouble for ‘destruction of property’ and get fined,” cautioned @moonhero46.