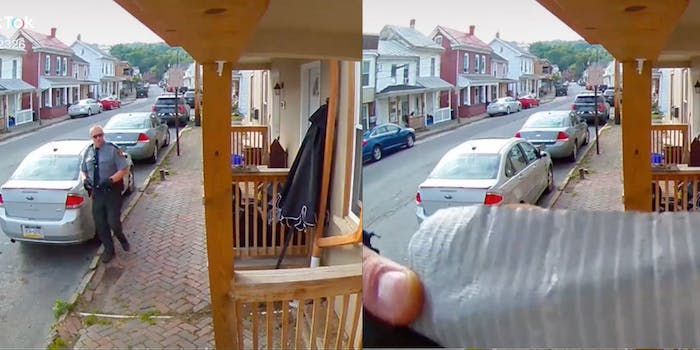 ‘Can they seriously do this?’: Video shows cop covering up security camera before knocking on TikToker’s front door

'There was no reason for him to put tape on my camera.'

TikToker Tiffany Knepp (@knepp2326) says she captured video that shows a state trooper covering the security camera on her porch—and she wants to know if that’s legal.

Footage that was allegedly taken before the camera was covered up shows a man in a uniform walking down a street toward Knepp’s porch. When he notices the security camera, he appears to cover it up with a dark piece of paper or tape.

The trooper can then be heard knocking on Knepp’s front door.

Knepp captioned the video, which she posted on TikTok, “Can someone please tell me if they can seriously do this???” The video reached over 614,000 views and accumulated almost 5,500 comments.

Most people in the comments were adamant that the officer’s behavior wasn’t allowed. Some said his behavior is a sign of police abusing their power.

“Yeah criminal in blue the worst kind,” one user commented. Another said, “That’s what happens when we give them [too] much power.”

Other users questioned why Knepp had her security camera stationed low enough to reach.

“Put them up higher, out of reach (also good for theft),” one person advised.

In a follow-up TikTok video, Knepp said that in the town she lives in, all the of the judges, police, and public defenders are “corrupt.”

As an example, she tells a story of her husband getting charged with harassment on a day that she was in a different county. Despite her explanation, she says, the county insisted “it was him.”

She says officials have it “out for” her husband because he is Black.

In another video, she says she can’t go into any more detail about the situation but that officer was at her house to question her husband about an altercation between her husband and his brother.

“There was no reason for him to put tape on my camera,” she says. “None, he had no reason at all.”

Although most people agreed with her, one person commented on her original TikTok that “it depends. What state are you in and did they say what the person had when he talked to you.”

Knepp clarified in the comments that she lives in Mifflin County, Pennsylvania.

Neither Knepp nor the Mifflin County Police Department responded to the Daily Dot’s request for comment.