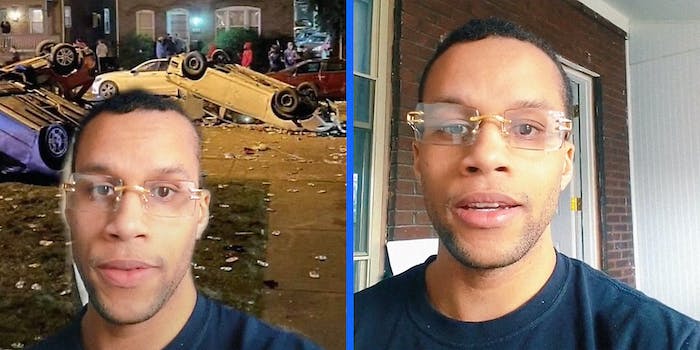 Ohio State students in Columbus partake in ChittFest every spring, a block party that has resulted in hundreds of thousands of dollars in damages to property on Chittenden Avenue in the past. Local police are aware of the event, including both when and where it takes place.

Last weekend, ChittFest attracted a crowd of over a thousand students on the block, some of whom flipped cars and smashed them up for fun.

A student who went outside to defend her ruined car from the “party-goers” said she called the cops but was told “they have other things to worry about and they’ll come down when it’s safe for them.”

That wound up being hours after the fact, and no arrests were made.

A TikToker named Alique shared pictures of the party’s aftermath, explaining the situation and comparing the lack of police response—despite extensive and predictable property damage—to how the police have approached Black Lives Matter protestors time and time again.

“These students did this just because they could. And if Black Lives Matter protestors were to go out today and protest for Ma’Khia Bryant in the same way these students ‘celebrated’ ChittFest, there would undoubtedly be arrests,” Alique said. “Everybody there would be teargassed.

“So why wasn’t this the treatment for Ohio State University students when they broke the law?” Alique asked.

Commenters had a nearly unanimous response to Alique’s rhetorical question.

“Not enough of em had melanin,” @flacothealpha agreed. “And none of em were asking for equality and justice.”

ChittFest is far from the only example of this blatant double standard of policing in the United States. Sports fans commonly riot through cities after a big game regardless of the outcome. Despite advance warnings, pro-Trump rioters stormed the Capitol on Jan. 6 without getting teargassed or arrested on the spot.

Meanwhile, Black Lives Matter protests get painted as destructive terrorist events that threaten the safety of communities, despite the overwhelming majority of them resulting in no property damage at all. Peaceful protestors get teargassed, assaulted, and arrested by hyper-vigilant police forces sent out in advance “just in case.”

Yet, as commenters noted, college students’ extensive damage to communities in which they are visitors for four years received minimal media coverage and no accusations of domestic terrorism.

The top commenter on Alique’s video wrote, “Sounds about white.”