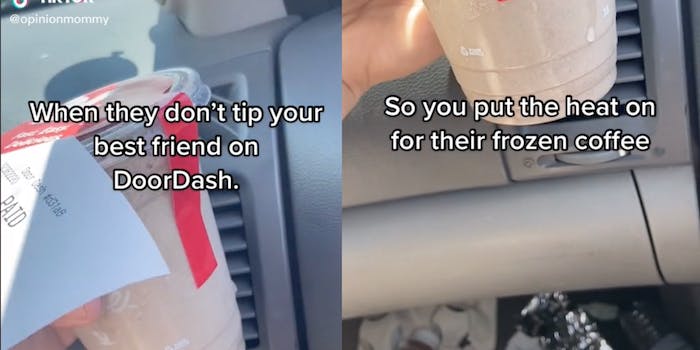 The joke made some in the no-tipping crowd feel validated. Others 'support' the ruining of the order.

The practice of tipping is a subject that gets debated on TikTok quite often.

After a customer didn’t tip their best friend, who delivers for DoorDash, TikTok user @notyournormalparent joked about messing with an order, dividing viewers and spurring yet another tipping debate on the platform.

The TikTok video shows a person holding a frozen coffee up to the car’s A/C vent. The TikToker claims they “put the heat on” the customer’s coffee.

However, the TikToker later set the record straight.

“The comments are cracking me up,” the poster wrote. “We didn’t have the heat on. We blast the A/C because it’s hot. Take a joke everyone lmao.”

The video has been viewed nearly half a million times since being posted on July 5.

The joke made some in the no-tipping crowd feel validated. “I find another reason everyday to not tip door dash drivers,” @diyanahhh_i wrote. Others even tagged DoorDash in the comments.

Other, more freaked-out DoorDash customers remarked on how they wait to tip in-person, instead of through the app, making it look like they initially don’t tip the DoorDasher. The poster acknowledged one such comment, saying cash tips in the area are rare, which is why they didn’t expect the customer to tip at all.

And some were just frustrated with the notion of not tipping DoorDashers.

“I support this,” one said before urging people to just “tip.”

Update 2:45pm CT, July 22: A DoorDash spokesperson told the Daily Dot in a statement: “Trust and respect in our community is extremely important and we take reports of this behavior seriously. Our policies strictly prohibit Dashers from tampering with customer orders, which will lead to immediate removal from our platform. We are actively investigating this and will take any and all appropriate actions,”

The Daily Dot has reached out to the poster on TikTok.