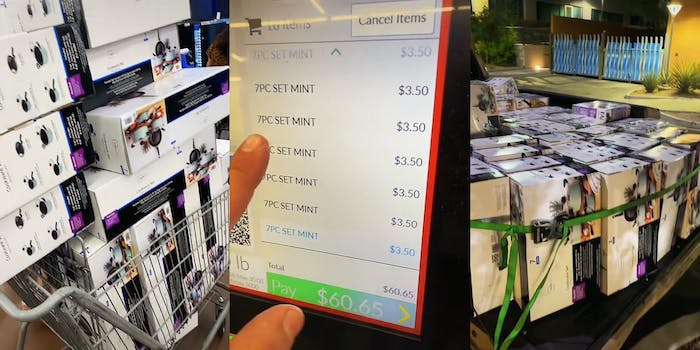 ‘So why can’t you just buy one or two?’: TikToker purchases cart-full of cookware sets on clearance at Walmart, sparking debate about resale

'Imagine thinking u should buy them all...'

A viral TikTok uploaded by user @extremewalmartclearance shows a shopping cart filled with multiple 7-piece cooking sets for only $3.50 a piece, which many presumed the TikToker purchased with the intention to resell them at a higher price. This sparked debate about the ethics of resale in the comments.

In the clip, the TikToker in question shows the self-checkout aisle, which displays a grand total of $60.65. In another section of the clip, a Walmart door greeter is looking at the shopping cart, seemingly in shock that they purchased so many pieces of the same item. They presumably checked the receipt as well and couldn’t believe that all of that product only cost $60.65.

By comparison, Amazon sells what looks like a similar set for $29.99, so to get a 7-piece set of cookware for just $3.50 is a pretty incredible deal. As a result, the TikToker claims the Walmart manager accused them of “doing something” and that one of the employees was being rude after seeing their haul pots and pans. It’s safe to say that they could list this online for $20 and probably get a decent return on all of these items.

@extremewalmartclearance Employee was being rude and ran for a manager saying I’m doing something… lol. I wasn’t having it. #fyp #foryou #walmarthiddenclearance ♬ Work Bitch – Britney Spears

However, some commenters on the post, after seeing the brand of cookware the TikToker was packing into their shopping cart said that the $3.50 price point is actually fairly consistent with the item’s quality.

“Those are worth about $3.50 actually,” one viewer wrote.

“I have them and I agree bahahahahah,” another responded.

“I bought a similar set from target once. Everything stuck to them and I felt like I could bend them in half,” a third claimed.

Others thought it was “grimy” of the TikToker to hoard all of the clearance items for themselves.

“Imagine thinking u should buy them all…,” a second added.

“Why buy them all??” another questioned.

“In Australia we have limits of how many items you can buy if they are on special,” a fourth claimed.

Others remarked that if the TikToker in question was purchasing all of them from Walmart just to go and resell them for a profit on each of the items, they believed that to be unethical.

“I think it’s rude buying them all to resell. But then again, I would have bought all of them to give away to all tías, madre y friends,” one user said.

Some viewers said it was strange that the TikToker would share the video to inform their followers of a deal that was going on in Walmart, only to go and purchase all of the items themselves.

“‘Check out this deal’ *Proceeds to buy all of them so no one else can have a part of deal,*” one user wrote.

“These are the type of people who are responsible for big corporations price gouging,” another argued.

Other commenters argued that those who were upset that the TikToker was able to get their hands on all of these pots and pans are just mad that they couldn’t do the same. And that if they aren’t breaking any laws or store policies, then it doesn’t matter why they purchased all of the pieces.

The @extremewalmartclearance TikTok account is described in its bio as a “family of 3, soon to be 4” who “love to clearance shop and show people how…”

There are several other videos of hauls at stores where they find deals on massive scores of items they can purchase, presumably to re-sell online on Amazon or other retailers in order to turn a profit.

The re-selling industry is a massive market, which experts predict will reach a total net worth of $53 billion in revenue by 2023. Thanks to online shopping tools and the ability to see the “web market value” of a product in real-time, scoping our IRL deals and reselling the products for profit is easier to do now than it ever has been before. In fact, some re-sellers head to discount/bargain stores and sometimes sell their items before they even leave the store.

The “ethics” of re-sellers who visit stores is oft-debated by many shoppers. However, there have been horror stories of folks having their online accounts “deactivated” despite having a ton of inventory on hand, so it isn’t all profits and social media gloat-posting. Plus, some products are put on clearance due to defects or low demand, which may leave resellers with a bunch of stuff they can’t move.

The Daily Dot has reached out to the @extremewalmartclearance TikTok account as well as their Instagram via direct message.