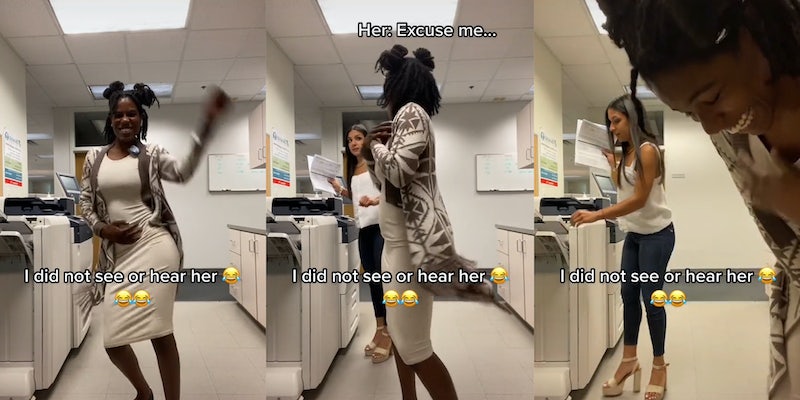 ‘I got fired for this video yall’: Woman gets caught by co-worker making TikTok video in the workplace

“Not her over there looking at you like a ‘Karen.’”

A woman on TikTok says she was fired after getting caught recording a TikTok dance at her workplace.

The woman, Tamara Khalifa (@tamarakhalifa7), shared the recording of her dance, which also shows another employee catch her in the act. That video received about 6.7 million views on the social media platform as of Wednesday.

In the video, Khalifa checks to make sure no one is watching before beginning a TikTok dance by a printing machine. Then, another woman comes around the corner to use the printer. Khalifa says she didn’t see or hear the woman until she said, “excuse me.” The TikToker laughs as she moves out of the way and stops the recording.

In a comment under the video, Khalifa wrote, “I got fired y’all,” accompanied by several laughing emoji.

Khalifa’s video was viewed 7 million times. Viewers loved the TikToker’s energy in the video but called out the other employee, calling her a “Karen.”

“She did NOT pass the vibe check,” one viewer commented about the woman.

“For her having all those papers, she didn’t understand the assignment,” a second viewer commented.

A third viewer wrote, “She didn’t have to look at you like that though.”

“That girl had some attitude over literally nothing,” someone else said.

In a follow-up video, Khalifa clarifies the woman in the video is actually “very sweet,” just “very professional.” “And you can’t blame her for that,” Khalifa says.

“I knew she didn’t seem like one of those people I could joke around with,” Khalifa adds. “But I was just copying some papers. I had to do a lot of copies, so I was going to be there a while. I was like, ‘You know, let me make a video.'”

Other viewers expressed they felt “getting fired from something this dumb is God telling you to move on.”

In other videos, she appears to be dancing in the restroom at work. In one, she urges viewers not to try to find the woman in the video, saying “let sis be.”

“She didn’t even come to work today … I hope y’all ain’t find her and bully her … BULLYING HER COULD HAVE ME IN HR FR! So please don’t! Lol I can stand up for myself lol,” she captioned that video.

In another TikTok video, Khalifa says again she did get fired from her job. However, the TikToker appears to be doing fine financially with the small business that she operates. In the video, she says she makes custom items like tumblers and ashtrays.

The Daily Dot reached out to user @tamarakhalifa7 via TikTok comment.