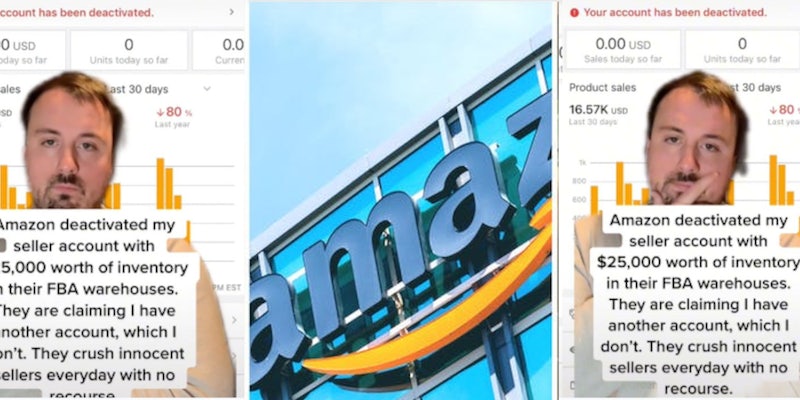 ‘They crush innocent sellers everyday with no recourse’: Amazon reseller says he was deactivated despite having $25,000 worth of inventory in viral TikTok

Amazon has repeatedly been accused of shutting down its competition.

An Amazon reseller on TikTok claims that his account was deactivated despite having $25,000 worth of inventory.

“Amazon deactivated my seller account with $25,000 worth of inventory in their FBA warehouses,” the TikTok user wrote. “They are claiming I have another account, which I don’t. They crush innocent sellers everyday with no recourse.”

FBA, also known as Fulfillment by Amazon, is a service that lets sellers outsource the shipping of their products to Amazon. The service is used by resellers and dropshippers looking to cash in on the ever-growing e-commerce market.

The video, which has since been viewed nearly 150,000 times, has drawn in a range of comments from users who claimed to have gone through the same experience.

“As soon as you start making a ton of money, they take you out and sell what you were selling,” one user alleged. “Did it to me. It happens daily.”

Another user claimed that their account was shutdown with over $60,000 in inventory, although the issue was remedied two months later “without explanation.”

“Happened to me with over 60 grand on hold right before Xmas,” the user said. “No reason or recourse.”

Amazon has repeatedly been accused of shutting down its competition or rebranding popular products and selling them for cheaper.

Just last month Amazon announced that it would be shutting down its “Sold by Amazon” program after the company was accused in Washington state of price-fixing, anticompetitive behavior, and violating antitrust laws.

“They about to start selling their own remake,” another user wrote.

The Daily Dot reached out to Amazon to inquire about the specific issue related to @tylephillipsecom but did not receive a reply.

“Been saying it since the beginning. They don’t want private sellers,” another user added. “They’ll use you, find your supplier, and discard you and sell it themselves.”

It remains unclear if the issue has since been fixed. In subsequent videos @tylephillipsecom, who did not reply to an inquiry from the Daily Dot, does not mention the status of his Amazon account.