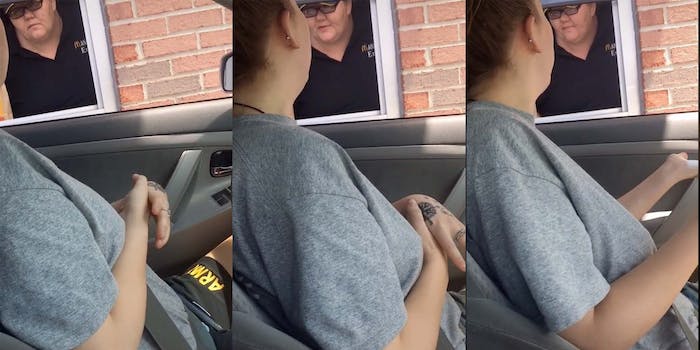 ‘He’s called off too many times’: TikToker confronts McDonald’s manager for making employee work while sick

The manager says she 'needs' the employee to work.

A viral video shows TikToker Sky Stram confronting a McDonald’s manager in a drive-thru for allegedly forcing her friend stay at work even though he’s ill.

“Can you tell me why you’re having someone who is sick working with food in food service?” Stram asks the manager through the drive-thru window.

The manager, Erin, insists the friend is fine even though he had allegedly thrown up multiple times.

“He’s perfectly fine. I have to have him in here. He’s called off too many times,” Erin says. From the car, Stram says that sick people working with food puts the health of others at risk.

Later in the video, a screenshot shows messages allegedly between the sick friend and their manager. Erin seems to disregard the friend’s messages about vomiting.

In a follow-up video addressing why she got involved with her friend’s manager, Stram says she had worked in fast food service management and explained the risks of allowing sick workers to prepare food.

“If you’re sick, you’re throwing up, you should not be working with food,” Stram says.

The Centers for Disease Control (CDC) reiterates Stram’s message: outbreaks of foodborne illness have been “linked” to sick food workers. Thus, “workers should be encouraged to not work when sick with foodborne illness symptoms,” says a resource from the CDC’s Environmental Health Services.

McDonald’s and Sky Stram did not immediately respond to the Daily Dot’s requests for comment.