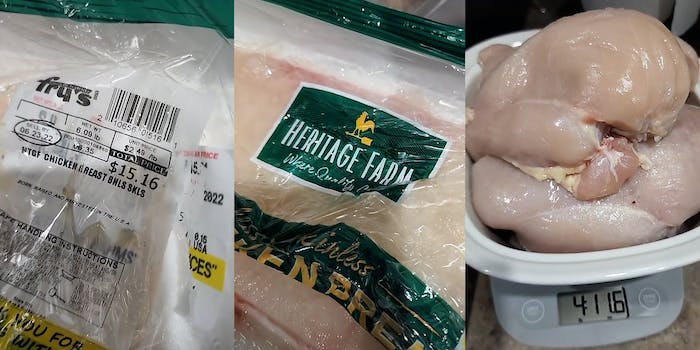 ‘I wonder how much money we have all lost’: TikToker weighs Heritage Farms chicken breast—realizes it’s 2lbs less than labeled

'Sounds like you found yourself a class action lawsuit!!'

A TikToker says the Heritage Farms chicken breast that she purchased from Fry’s Food and Drug was two pounds less than what was labeled—and paid for.

“My family picked up our groceries today, some chicken from Heritage Farms,” she says in the video. She then zooms in on the packaging, which was labeled as 6.09 pounds for $15.16.

“As I’m preparing this to go in the freezer, I was curious, is this 6.09 pounds of chicken that we paid for? So I zeroed out my scale and we’re going to see,” she says. She puts the chicken on the scale and it reads that it weighs 4.11 pounds.

“There you have it. Four pounds, 11 ounces, when we are paying for 6 pounds, .09 ounces,” she says. “Check your chicken. Weigh it. Let me know if this is just Heritage Farms or if it’s all of them.”

Commenters tried to solve the mystery, saying that it could be that the chicken was weighed while frozen, and all the moisture leaks out when it thaws. Others said the weight includes the packaging.

“This is why I buy our meats from local farmers. Haven’t bought any type of meat from a grocery store in several years,” another commented.

“Thanks for the awakening,” another viewer wrote.

In a second TikTok, Garcia says she checked with the United States Department of Agriculture, and “the net weight should be the chicken only.”

She’s partially correct. “It is the weight of the nutritious content in the container suitable for food,” the USDA states. However, the Food Safety and Inspection Service “considers free-flowing liquids in packages of meat and poultry products to be integral components of these products.”

Some suggested that they inject the chicken with water or salt water. According to the USDA, that’s not entirely true. Chicken is not injected with water but it’s naturally absorbed when the chicken is being cooled in a vat of moving cold water. Chickens that weigh 4.5 pounds and under can absorb up to 8% of their weight.

Garcia says she contacted Fry’s Food and Drug and they offered her a $20 credit, which she used to buy another package of chicken breast labeled at 5.34 pounds. The creator says the store said they would reach out to Heritage Farms and asked Garcia for photos of the packaging, which she sent.

In the follow-up video, she weighs the chicken from the second package, which ends up being four pounds and 1.1 ounces.

“The most reliable thing you can do is buy from a butcher or meat counter,” Garcia wrote in the comments.

“Wow I wonder how much money we have all lost,” one user commented.

The Daily Dot has reached out to Fry’s Food and Drug and Heritage Farms via email, and Garcia via TikTok comment.