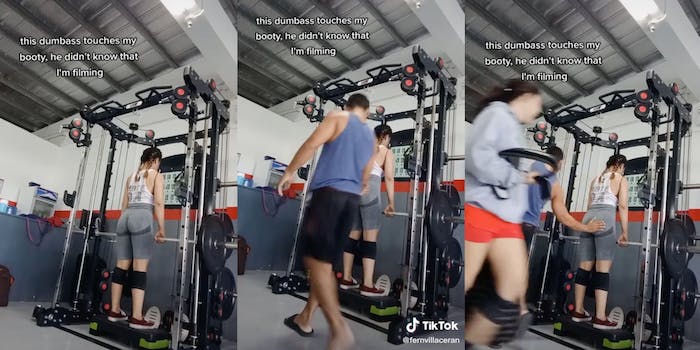 ‘He didn’t know I was filming’: TikToker catches man touching her butt while she works out at gym

A woman is putting a guy who touched her butt at the gym on blast after he didn’t realize she was recording at the time.

Twenty-two-year-old @fernvillaceran was filming a video for TikTok when her camera captured a guy walking behind her and touching her inappropriately while she was in the middle of her workout.

“This dumbass touches my booty, he didn’t know that I’m filming,” she wrote over the video.

Meanwhile, the caption itself revealed something even more vulnerable.

In a series of followup videos, she says that she’s been harassed before, allegedly including by this same man at her gym. After accusations that the whole thing was staged, Fern tearfully clarifies that the man is neither her husband nor her boyfriend and that he’s been seen in some of her videos before because he actually works there.

“I already talked to the owner about this,” Fern says, adding that it “wasn’t enough.”

A number of commenters were fiercely on her side, defending her against the people claiming the video was staged or not a big deal and pointing out that this kind of thing is all too commonly experienced by women at the gym.

“So what if it’s staged?” one TikTok user asked. “This happens in real life, filmed or not, now go cry about it boys.”

“Don’t ask why she’s filming while working out or y she didn’t respond or if she didnt know how to,” @lee0nix added. “NO MATTER THE SCENARIO KEEP YOUR HANDS TO YOURSELF.

Just in May, some men on TikTok were upset over a viral video featuring a women’s only gym, insisting that there is no need for that kind of space and that men harassing women working out doesn’t happen. And yet incidents like Fern’s keep being reported on social media—and for every one that gets reported or accidentally recorded, there are undoubtedly many more that don’t.