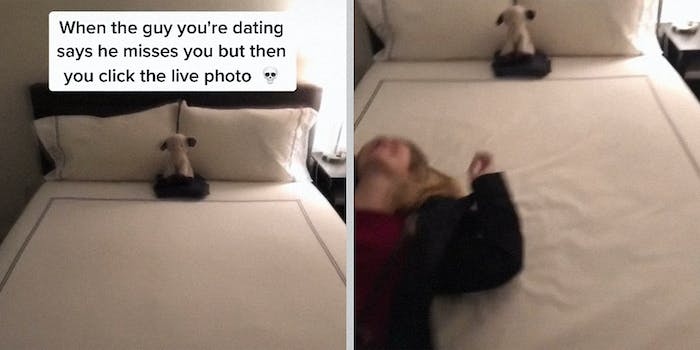 'When the guy you’re dating says he misses you but then you click the live photo.'

A TikToker says she realized her boyfriend was probably cheating on her after he accidentally sent her a “live” photo with a surprising reveal.

Serena Kerrigan shared the unintentional video with her 283,000 followers alongside the caption “When the guy you’re dating says he misses you but then you click the live photo.”

What was obviously supposed to be a still image starts out with nothing more than a hotel bed with a stuffed animal sitting up by the pillows. But the “live” feature unwittingly captured the few seconds that followed the snap—an unidentified woman falling into frame and onto the bed.

iPhone owners can turn on the live photo feature by hitting the series of circles near the flash button—and it’s easy to do by accident. If the button turns yellow, live is active, and when you try to take a picture, you’ll capture several moments after the still image.

Not everyone notices when the live feature gets turned on, and even fewer tend to notice when something in their camera roll was subjected to it. It isn’t surprising that a potential cheater was outed in such an awkward manner.

The TikTok also prompted viewers to desperately inquire about the follow-up conversation since the man presumably didn’t realize he’d given himself up.

“Please tell me you said ‘check the live video’ and then turned off your phone,” wrote @plaidpeacoat.

“He probably thought ‘glad I got the pic before she photobombed,’” @iconicolee joked.

Another TikToker pointed out that “you can save it to your camera roll and pull up the exact location,” suggesting Kerrigan could’ve gone and caught him even more red-handed.

Unfortunately for all the invested viewers, Kerrigan hasn’t posted an update about her relationship status. But she did take the time on Twitter to wish a “Happy Mother’s Day to all the women raising their boyfriends.”