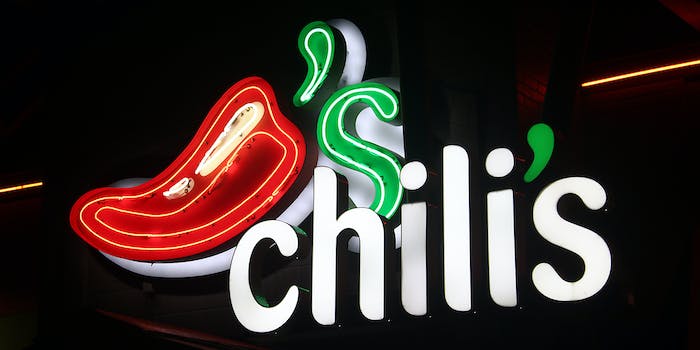 ‘There’s no protocol that is actually followed’: TikTokers accuse Chili’s of refusing to close after workers get COVID

'Don’t think that you’re safe going out to eat.'

TikToker @alexservestea, who outs bad practices in the restaurant industry in general and often the Chili’s chain specifically, is highlighting accusations that locations of the popular suburban franchise are staying open even after workers tested positive for COVID-19.

Viewers of Alex’s content have repeatedly written in to claim that various Chili’s locations across the country aren’t taking proper COVID precautions, due in part to corporate policies.

“The Chili’s near me, in Texas, the manager can’t make her employees get vaccinated and 15 tested positive,” one whistleblower claimed. “She asked HR to close down for a day or two so they can all get tested and vaccinated (even though ppl probably wouldn’t get vaccinated still), and Chili’s corporate said no.”

Alex says she’s highlighting the claim because she’s actually had “quite a few people” message her with similar allegations against the company, all in different locations. Her video titled “Chili’s isn’t taking COVID precautions” has been viewed over 187,000 times.

Another user in Florida wrote her with the claim that their Chili’s location forced people to come to work when they were sick but hadn’t gotten the results of their tests back yet, and 10 employees later tested positive.

“And they still aren’t shutting down, cleaning, or taking any precautions to protect the staff or guests,” the anonymous TikToker wrote.

Yet another alleged Chili’s employee said their co-workers were told by their general manager not to let anyone know they were taking a COVID test so it wouldn’t “worry people” and cause staff to call out to avoid getting sick.

A repeated concern from commenters seems to be that they don’t know who at the company to contact about potentially dangerous marching orders.

“There’s no protocol that is actually followed anymore,” one person wrote.

Restaurants across the country have been running low on workers due to low wages and servers’ general disinterest in risking their health while dealing with inadequate safety measures and argumentative anti-maskers. It’s feasible that restaurants wouldn’t want to run even shorter on staff, but many people expect COVID safety precautions to be clearly stated and enforced at places they work and spend their leisure time.

“Don’t think that you’re safe going out to eat just because you put a mask on or you’re vaccinated,” Alex said. “Everybody at Chili’s is clearly getting sick at different locations.”

According to Chili’s website, the franchise is “still taking extra precautions against COVID-19 to care for” customers and employees and states that it’s “staying close” to guidelines provided by the CDC and state and local mandates.

Chili’s also responded to multiple complaints on Twitter, saying that it’s investigating the claims made in Alex’s video.

The Daily Dot reached out to Alex and Chili’s.