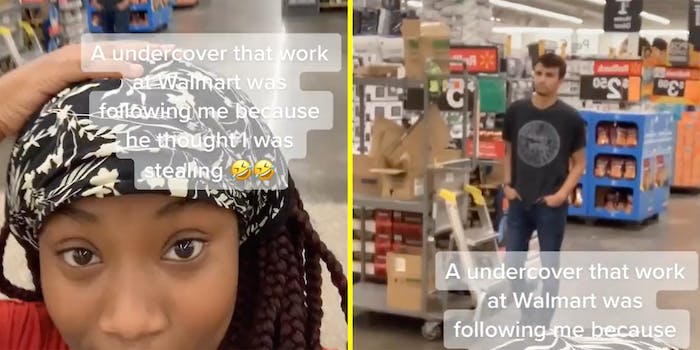 ‘This is harassment, sir’: Black TikToker films man she says is following her around Walmart, accusing her of stealing

'Pose for the camera.'

In a viral TikTok video, a Black TikToker films a white man she believes to be an “undercover” Walmart employee following her because he thinks she’s stealing. Her video led to discussions of racial profiling in the comments.

“Pose for the camera,” the user, Ariah Carter, says pointing the camera at the man, who’s wearing plainclothes and walking awkwardly with his hands in his pockets behind her.

“You following me. This is harassment, sir, can you pose for the camera?” Carter says in the video, which has over 628,000 views.

Carter says via text in the brief video that the man is an “undercover” worker who was following her through the store and accusing her of stealing. “I can’t get my food in peace,” she captioned the TikTok. It’s unclear whether or not the man is actually a Walmart employee.

The video received over 600,000 views and prompted a discussion of Carter’s reaction and racial profiling in the comments.

Many users claimed that there shouldn’t be an issue if Carter wasn’t stealing anything.

“He is doing his job. If you aren’t stealing then what’s the problem?” one user said.

“If you are not stealing why care. They did it to me I was not even worried because I did not steal,” said another.

However, other users noted that Carter’s reaction was a valid response to being followed.

“Even if they [aren’t] stealing anyone would react if some dude was walking slow behind them.,” one user said.

Many also pointed out that Carter deserves to feel safe while shopping and that those criticizing her don’t understand what it’s like to be accused of stealing or followed in a store.

“All the [white] people who’ve never been followed a day in their life trying to blame her,” one user wrote.