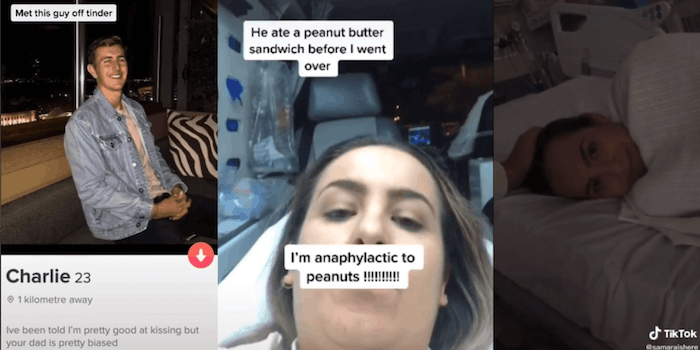 Her Tinder match accompanied her to the emergency room.

One couple’s decision to go on a first date in the middle of a global pandemic landed them in the emergency room—but not for the reason you would assume.

Samara Hnaien, a 22-year-old Australian native, told via TikTok the unforgettable tale of how a stolen kiss became a medical emergency, and how, apparently, a peanut butter sandwich was to blame.

Apparently the two hit it off after exchanging a few messages through the dating app before deciding to set up a first date at Harris’ house since everything is shut down due to the virus.

Things took a turn for the worse when the pair decided to lock lips, triggering Hnaien to have an allergic reaction.

“My whole mouth started tingling mid-kissing basically, which is the first sign to me that I’m having a reaction, and I hadn’t eaten anything, so I thought he must’ve had something that had peanuts in it,” Hnaien told BuzzFeed.

Unbeknownst to Hnaien, who has a severe anaphylactic allergy, her date ate a peanut butter sandwich right before her arrival. And because he wasn’t aware of her allergy, he failed to warn her.

Hnaien and Harris’ TikTok videos detail the rest in short clips: In one, Hnaien can be seen strapped into a gurney in an ambulance, while Harris supportively accompanies her on a trip to the hospital. And in another, captioned “3 hrs later in the ER,” she is seen sporting a big smile.

The whole fiasco ends with Harris soothingly stroking her hair while she recovers in her hospital room. Though not quite the end anyone would anticipate for a first date, his comforting gesture did add a bit of romance to an otherwise traumatic and eventful string of events. And he certainly impressed his date.

“He handled the situation as best as he could’ve,” Hnaien told Buzzfeed. “He was really caring and genuine and made me feel at ease and kept reassuring me to not feel embarrassed or anything like that because I was just mortified and felt so bad for him. … It’s a pretty confronting experience stabbing someone with an EpiPen especially when you first meet them haha.”

In this strange time of uncertainty, one thing seems almost definite: Hnaien and Harris won’t be sharing any more peanut butter-filled kisses.

The Daily Dot reached out to Samara Hnanien but did not receive a response by publication time.