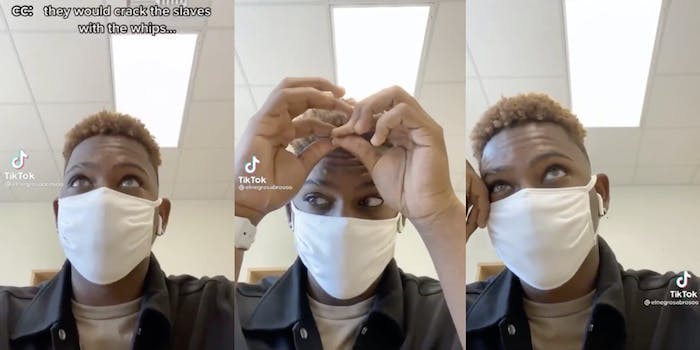 TikToker catches teacher gaslighting students about history of the N-word

'America is a joke, get this man FIRED.'

A high schooler recorded his teacher attempting to gaslight students about the history of the N-word and uploaded it to TikTok, opening up a debate as to what kind of racist nonsense is getting taught in schools.

Hector (@elnegrosabrosoo) started recording in the middle of an argument his AP government teacher seemed to be having with another student relating to the origins of the N-word.

“They would crack the slaves with the whips—“ the other student says.

“They wouldn’t do that to the salves,” the teacher interrupts, with what appears to be a fascinating rewrite of history.

Hector cracks a joke over the absurdity of such a claim, and his teacher loses it, mocking him and insisting they need to have an “honest conversation.” He then asks the confused class what someone is being called if they are called the N-word.

Of course, the teacher’s claim is itself thoroughly ignorant—and seemingly willfully so.

The literal dictionary definition of the N-word is “a contemptuous term used to refer to a Black person,” and it absolutely has roots in oppression and bigotry. To suggest it truly means “ignorant” and nothing more sounds more like some attempt to be edgy and controversial on Reddit than something being passed along by an actual teacher.

Commenters were displeased to find out this is what some students are having to deal with in school.

“A history teacher not understanding slurs have historic implications??” asked @xxgatorade. “America is a joke, get this man FIRED.”

Another user suggested Hector “take this to a parent and have them take it to county superintendents. This teacher is not [equipped] enough for these conversations & job.”

A follow-up video that appears to be from the same day features a female student trying to explain to the same teacher that telling a woman her place is in the kitchen rather than the workplace is hate speech “because that attacks women,” to which he responds “to YOU, that’s hate speech.”

People online have already determined the name of the high school and are lodging their own complaints against the teacher.