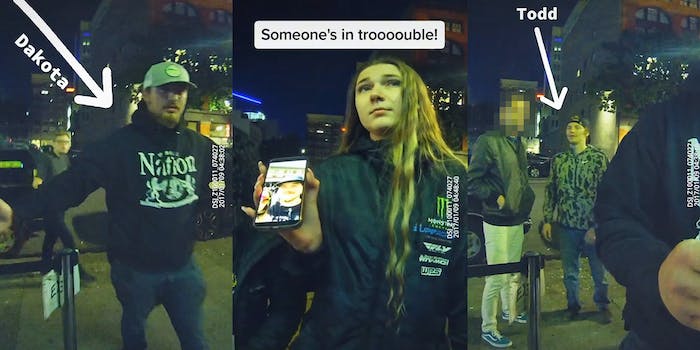 In a series of viral TikToks, a strip club bouncer told two women tracking down their “missing” boyfriends that they were in the strip club he works for. In the comments, people said the bouncer broke the “bro code.” Others said he’s a “good man” for telling the women.

Bruce Bear (@fatbouncer) posted the first TikTok on Monday with the caption: “In all my years of bouncing, I’ve never seen anything like this.” In the footage, two men named Dakota and Todd enter the club. Later that night, two women arrive looking for the men.

@fatbouncer In all my years of bouncing, I’ve never seen anything like this… 😂😂🤣 It gets even BETTER in the next 2 videos! This is 1 of 3! #nightlife #downtown #MakeNightsEpic #bouncer #spicygym #latenight #afterhoursclub #skrippertok #spicydancerlife #tagyourfriend #MakeASplash #yououghtaknow ♬ You Oughta Know (Jimmy the Saint Blend) / Your House (A Capella) [2015 Remaster] – Alanis Morissette

“Could you do me a favor and tell me if someone has entered the building if I show you a picture of them?” One of the women asks, according to footage in the second TikTok, which has 4.8 million views as of Tuesday.

“At first I didn’t know if I should divulge any information,” responds the bouncer.

“They’re currently missing,” she says. “We’ve been looking for them for the last three hours so I just wanted to know if you’ve seen this guy enter the building at all.”

“But after thinking about it for a little, while I figured these ladies have been through enough drama and deserved some answers,” says the bouncer.

“I swear I just saw him,” says a man who is with the bouncer.

“Don’t fuck with me right now,” says the woman, whose boyfriend seems to be Dakota.

The other man says Dakota is upstairs at the club.

“Is he in trouble now?” the bouncer asks the two women.

The other woman says they have been on a “wild goose chase to four different strip clubs looking for them. [They’re like] we’re here or we’re there, oh we’re over here.”

In the last clip, the woman says, “I’m shaking with anger right now.” The women then enter the club, and yelling can be heard in the background.

“Not gonna lie,” the text overlay reads. “I was kinda wishing I was inside to see the righteous anger those ladies were dropping on Dakota and Todd.”

“You do EVERYTHING that I say I hate. EVERYTHING!” you can hear the woman yell at her boyfriend.

TikTok users were divided on who, if anyone, was in the right in this situation.

Some commenters said the bouncer wasn’t doing his job letting the women in: “As a bouncer I did my best to keep drama out of my bar… why r u letting it in.. that messes up the vibe & spending?”

Some said the bouncer “broke the bro code.”

One user wrote, “You don’t break bro code. they are not in there.”

“U shouldn’t divulge info, patrons deserve their privacy,” commented another.

Others applauded the bouncer for telling on the men.

One user said, “Bro code is to hold bros accountable. Be better, not even.”

“She was very courteous and respectful when asking. That’s class right there not to talk silly to the doorman. The problem was her partner. Hi5 lady,” someone else wrote.

The Daily Dot has reached out to Bear via Instagram direct message.