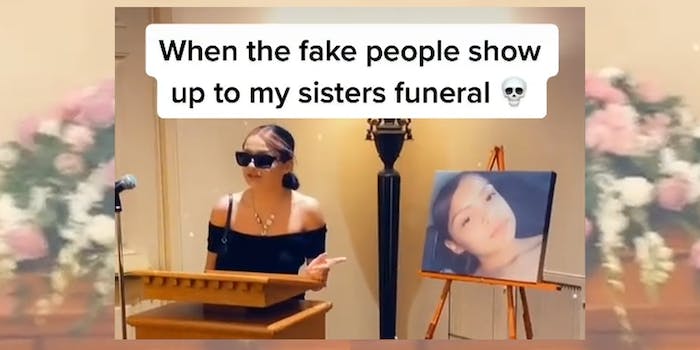 ‘You’re a fake b*tch’: TikToker calls out attendees of her sister’s funeral

A TikToker’s video calling out the “fake people” at her sister’s funeral is going viral as viewers show support for her point of view.

Jasmine (@jazzklassykushco) shared the video with a text overlay that said, “When the fake people show up to my sister’s funeral.”

The camera pans across the front of the room, revealing flowers, a closed casket, a photo of Jasmine’s sister, and Jasmine herself, standing at the podium with sunglasses on.

“You’re a fake bitch,” she says. “She didn’t even like you. You owe her money. And I didn’t even see you donate to my sister’s funeral, so you’re automatically disqualified. You can leave the room. Yeah. Bye. Bye. Don’t be all surprised now.”

The gasping audio at the beginning of the video is snagged from a pre-existing TikTok and is commonly used by other users on the platform. It isn’t immediately clear whether the dialogue came from elsewhere or whether Jasmine was speaking to actual funeral-goers or an empty room.

Regardless, the energy behind the video resonated with a number of viewers.

“Your sister probably would’ve wanted you to say that,” @slain wrote.

“No bc if my sister doesn’t do this for me… there gonna be a whole bunch of people saying they were my ‘friend’ & they weren’t,” @aaliciaallen agreed.

Not everyone was supportive, with commenters suggesting “it is in bad taste to express any issues” at funerals or that it’s “kinda disrespectful” to assume people didn’t care. But those responses immediately faced pushback from other viewers.

“If you weren’t there for her in life don’t be there all of a sudden afterlife,” @witchystevie commented.

“I fully support this and actually told my best friends to do this for me,” @nfgnexuz said. “Cuz if I was alive I would do it myself.”

Jasmine told the Daily Dot that both she and her sister loved the show Pretty Little Liars, which featured several funerals with a dramatic flair, so it was important to her to “give her funeral that touch.” She added that she’s certain her sister, who was 18 when she died, would have appreciated the gesture.

The TikToker previously shared news footage and articles about the car crash that resulted in her sister’s death, along with a GoFundMe for funeral expenses.

“I hope I gave you the best funeral baby sis,” she wrote. “Fly high.”