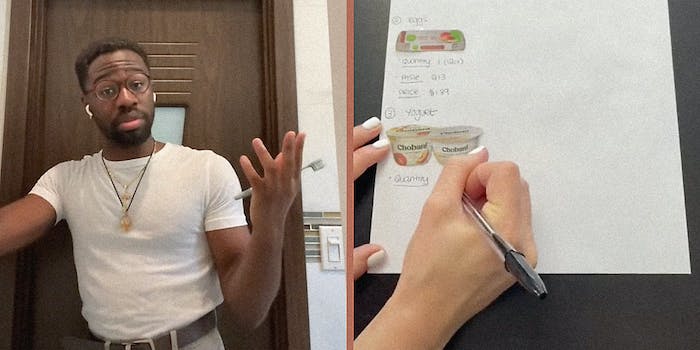 The concept is called 'weaponized incompetence.'

A viral TikTok that shows a woman making a highly detailed grocery list for her husband to take to the store sparked a mix of responses— and one fellow TikToker thoroughly dissected the situation.

Melinda of @adamxmelinda posted a video of herself writing out a grocery list that not only named the items she wanted her husband to pick up at the store, but included the aisle, price, and a picture of what each item looks like so her husband couldn’t possibly get confused. She also hand drew a map of the store itself with corresponding locations.

Though Melinda clarified that the whole thing was a joke, the video still resonated with people who know the struggle of trying to get a significant other to put some effort into accurately reading and utilizing a grocery list.

It also prompted some discourse on the matter.

TikToker @notwildlin stitched Melinda’s video to discuss something he says another creator brought up first: performative, or weaponized, incompetence.

A husband tricking his wife into holding his hand through an activity he should be able to do likely results in her taking it on herself and absolving him of the responsibility, @notwildlin explained, adding it’s “an investment in the man’s future self.” In theory, it will both let him off the hook of contributing to the household and will set the bar so low that anything he does contribute is seen as “incredible.”

Viewers were quick to pick up what the TikToker was putting down, sharing their own experiences with weaponized incompetence in their own lives or as something they’ve observed.

“Every sitcom has an episode where the dad shows the son his ‘trick’ at being bad at furniture shopping or something so he gets out of doing it forever,” @abelthatme pointed out.

Another user said her boyfriend told her that “he once messed up laundry so his mom would do it,” adding that she definitely didn’t marry him.

While the original video only points to gendered issues, @notwildlin took conversation to the next step, pointing out how the same concept of weaponized incompetence could be applied to issues of race.

“I think that actually, in the same way, mediocrity is a gift that whiteness gives to its own future,” he theorized. “That whiteness performing mediocrity sets the bar so low that the generations that will eventually inherit the legacies of whiteness can do anything and feel entitled to like, riches and fortune.”

He added that such a setup allows for society to praise white people for doing “just more than we would expect from them” in the same way that husbands successfully taking on any household responsibilities are applauded for such minimums.

“And because of anti-Blackness, it’s the opposite for Black people, right?” @notwildlin asked. “To escape the violence of whiteness, you have to perform such excellence, and inherently the bar is getting higher and higher until you have all these superhuman Black people who are just getting by.”

The Daily Dot reached out to Melinda via Instagram message and @notwildlin via TikTok comment but did not immediately hear back.