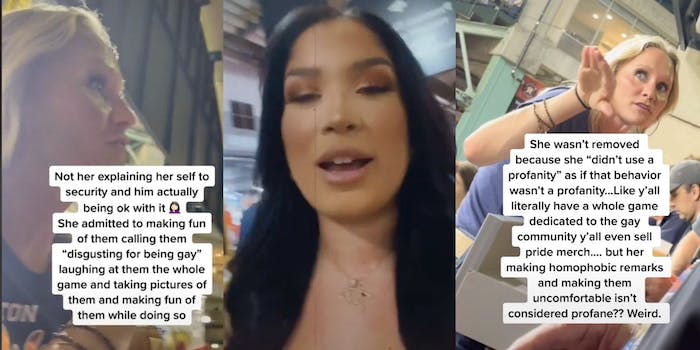 People are calling for protocol reviews at Minute Maid Park after a TikToker claims a homophobic Karen harassed a lesbian couple at a game while security did nothing to help them.

The video, posted by @talimedina, shows the TikToker walking to meet her friends: a lesbian couple at another area in the stadium. She says one of the friends texted her claiming a woman sitting behind them was making homophobic comments and taking pictures of the couple.

The TikTok was posted early this morning and tags the Houston Astros, the home team, in the caption. A creator comment was later added saying: “… Minute Maid park doesn’t have a tiktok that’s why i tagged astros we love them but security failed my friends… so it’ll reach whomever it needs.”

The Daily Dot reached out to the Houston Astros for a comment.

When the TikToker reaches her friends, she videos the woman in question speaking to someone who appears to be a security guard. The audio is difficult to make out, and at one point the woman leans in to whisper to the guard, but the video caption reads:

“Not her explaining her self to security and them actually being ok with it. She admitted to making fun of them calling them ‘disgusting for being gay’ laughing at them the whole game and taking pictures of them and making fun of them while doing so.”

The TikToker then states the woman was not removed even though she was disruptive.

“She wasn’t removed because she ‘didn’t use a profanity’ as if that behavior wasn’t a profanity…Like y’all literally have a whole game dedicated to the gay community y’all even sell Pride merch…. but her making homophobic remarks and making them uncomfortable isn’t considered profane?? Weird.”

Pride Month this year has seen many companies and individuals be called out for advertising LGBTQ+ support to the public but not being queer-friendly internally or outside the month of June.

“Way to run to defend your friend. Some people don’t deserve the right to go out in public. Love is all inclusive,” commented TikToker @toddfathr.

“I hope the @houstonastros give you guys tickets for another game to enjoy!” wrote @jsolano9_.

The creator responded: “LOL honestly I don’t want anything just people to be held accountable and protocols to be updated, no reason for her to be able to stay.”

In another TikTok posted later today, @talimedina describes some further backstory to the incident.

She says the woman was “completely allowed a pass” because she didn’t curse at her friend or call her a bitch, but she argues what the woman did was “worse.”

“Y’all can’t let shit like this slide,” she says, addressing the Astros directly. She also describes how she went to her friends’ aide and spoke to the woman who was allegedly harassing them, saying she was “disrupting their peace.”

She claims the woman—who she calls a “disgusting waste of space”—said she herself has gay friends and attempted to defend her actions, which according to @talimedina included calling her friends derogatory names.

“First of all being nosey paid off because I’m early. Second, was the guy in front of them trying to help he seemed concerned,” asked @megroe95 about the other people in the TikTok.

“Yes, the guy in front and everyone around were so kind and weren’t having her shit either,” replied the creator.

“I’m not blaming the team… I’m still gonna go to Astros games… But y’all need to do better and treat that as a profanity,” she says in the video. “She completely got away with making them feel so uncomfortable for being gay.”

MLB has an official stance on discrimination that is detailed on its website. It reads in part:

“Harassment and discrimination have no place within or around Major League Baseball—we must work together to build an even playing field for all those involved in our beloved game. If you wish to report a concern about conduct inconsistent with these principles, please call our externally managed Speak Up hotline at 1-844-993-0562.”

The Daily Dot reached out to the TikToker for comments.