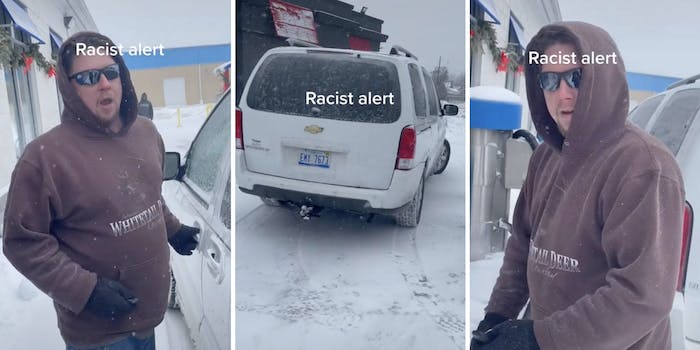 ‘You should be kinda grateful that we allow you to come here’: Male Karen makes racist comments to car wash owner during snowstorm in viral TikTok

'Not a single thought in his head.'

A viral TikTok shows a white man making racist statements to the owner of a car wash in Michigan when he’s asked to move his car during a snowstorm. At least one commenter called the man a “Karen.”

The TikTok was posted on Friday by Ali Turfe (@westborncarwash25073), who owns Westborn Carwash in Dearborn, Michigan. Turfe wrote in the caption, “Car wash closed due to snow storm, asked customer to move vehicle so we can plow the lot, this was his response.”

The clip shows a man in a hoodie and jeans getting into his car. Before driving off, he tells the TikToker, “No, you’re from another country so when you come here you should be kinda grateful that we allow you to come here and work.”

He continues, “If you went back to your own country, you know the way things would be.”

In the video, Turfe responds: “Where’s my country at? Do you know where I was born and raised?”

As of Monday, the TikTok had over 188,800 views. “Mr Karen where did he come from,” one commenter wrote. “Not a single thought in his head,” another added.

In a phone call with the Daily Dot, Turfe said that his carwash was closed down because of the snowstorm, and he hired a company to plow the lot. The company’s protocols required that the lot be completely empty in order to be plowed, so he coned it off.

The man apparently snuck through the cones to try to use the vacuum, which was turned off for the day. “I approached the vehicle and I’m like, ‘Excuse me sir, it’s closed down and snowing. I’ve got a company coming to plow the lot and I need you to move this vehicle,'” Turfe said.

According to Turfe, the man started cursing at him and refused to move his car. Then he started calling Turfe racial slurs.

“He got out of his car to get close to me and I didn’t know if he had a weapon so that’s when I pulled out my phone,” Turfe said.

“This is my hometown and it’s a very diverse community,” Turfe said. “It was kind of shocking to actually encounter a situation like this.” He added that he hopes this video will expose him for the way he talks to other civilians, “which is not right.”

“At the end of the day, we should all treat each other with love and respect,” Turfe said.