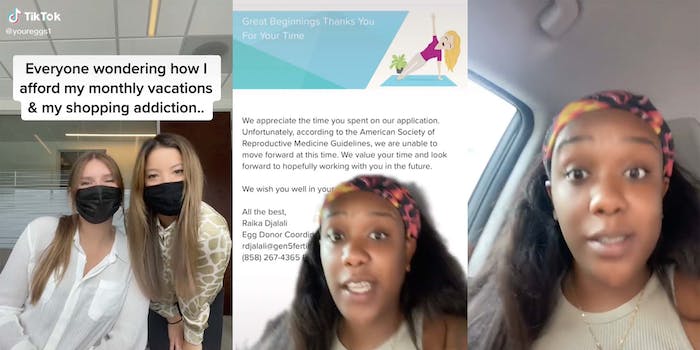 ‘You guys have some explaining to do’: TikToker says egg donor application was denied because she’s Black

The company denies denying the application based on race.

In a video posted on Wednesday, Sasha Jones (TikTok user @Slimmothyy) says that when she applied to be an egg donor using her real height and weight and listed “other” as her race, her application was denied.

But Jones says when she applied with a lower weight and height and listed herself as white, she was accepted.

Jones says she tried to apply a third time with the shorter height and lower weight but her race listed as Black—and her application was again denied. The company denies that Jones was denied based on her race.

The video that Jones stiched was posted by @YourEggs1 and involves TikTok’s latest trend: revealing unexpected information to the tune of the Backyardigan’s “International Super Spy.” Young women in the video say they are able to afford “monthly vacations” and frequently go shopping because they donate their eggs “every three months for thousands” of dollars.

The account @YourEggs1 is affiliated with Your Eggs, a company that describes itself as “one of the largest family-building communities creating a personalized experience of searching, discovering, and matching” egg donors with prospective parents.

In Jones’ TikTok, she points out that comments on the original video from Your Eggs show “the same type of people” being accepted, and others are “noticing why they’re getting declined.” “You guys have some explaining to do,” Jones says.

Since Jones’ TikTok was posted, Your Eggs has turned off comments on its original video. Jones told the Daily Dot that Your Eggs has not contacted her with a response to her TikTok or an explanation for why her original application was denied.

Your Eggs’ application is powered by Egg Donor Connect, a software company that “provides technology that fertility clinics use to receive egg donor applications and match donors with intended parents,” according to President Max Asciutto.

Asciutto told the Daily Dot that clients of Egg Donor Connect, including Your Eggs, “create their own applications, review all donor applications themselves, and they work with intended parents directly.”

Erika, who works in the marketing department of Your Eggs and declined to share her last name, told the Daily Dot that a “multitude of different factors” are considered when reviewing applications from Egg Donors.

“We have intended parents who are looking for all types of donors, from all over the world,” said Erika. “We want all donors—all qualified egg donors— to be part of that.”

In response to Jones’ TikTok, Erika said Jones decreased her weight in applications that were accepted. In accordance with guidelines from the American Society for Reproductive Medicine, Your Eggs doesn’t accept applications from egg donors who have a BMI over 30.

In addition, Erika said that Your Eggs accepts applications from egg donors between the ages of 19 and 29. Jones told the Daily Dot that she is 31.

Beyond her experience with Your Eggs, Jones used her platform to talk about the fertility industry at large.

In a follow-up video addressing a commenter who says their application to Your Eggs was denied when they listed their race as Hispanic, Jones shouts out a comment on her original video from TikTok user @e_401 that says “fertility clinics don’t sell that many Black eggs so they don’t want to pay you for something they won’t sell.”

The comment is unsubstantiated, but KFMB-TV reports that some Black prospective parents have difficulty finding eggs donated by Black women.

“According to local fertility clinics, where we fall short is in the number of Black takers or prospective parents,” Alicia Summers reports. She writes that the race and ethnicity of egg donors and prospective parents are “cultural” factors that vary based on region.

Jones told the Daily Dot that she wants to donate her eggs because she doesn’t want children. She hoped to use the payment to pay off her student loans and eventually open an animal shelter.

As a solution to issues that she and other women of color have had donating their eggs, Jones has been told that infertile prospective parents of color frequently approach eggs donors of color directly rather than use egg donor companies—or adopt instead.

Your Eggs told the Daily Dot that it has not been able to find Jones’ application in its system because although she submitted it (as shown in her TikTok), it seems she didn’t create an account with Your Eggs after doing so.

“If they don’t create an account, their application doesn’t go through,” Erika said.