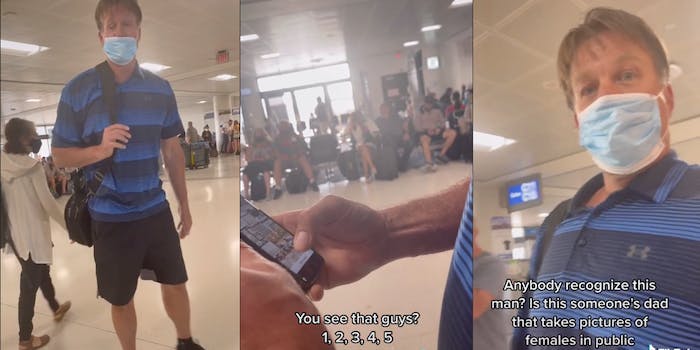 ‘I’ll call you out any day’: TikToker star confronts ‘creepy’ man taking photos of her at airport

'Is this somebody's dad that takes pictures of females in public?'

People online are heaping praise onto two women for tracking down and confronting a man who took photos of them without their permission.

Confrontations of this kind have become increasingly common as young women feel more empowered to stand up for themselves. Last week, TikToker @j_rodriguezxo went viral for squaring up with a man who snapped shots of her during her workout. This week a different TikToker is going viral, after she and her friend stood up to man who followed and took photos of them at the airport. Initially shared to @bailzherb’s TikTok account and her 170,000-plus followers, where it promptly collected more than 2 million views, the video has since spread to Reddit’s r/PublicFreakout. There, it has likewise racked up thousands of views and upvotes.

The video begins as @bailzherb and her friend approach a middle-aged man in a black and blue striped T-shirt. The women immediately ask if he’s been taking photos of them, which the man promptly denies. When they ask to see his camera roll, the man attempts to flee, telling them it’s “OK, I wasn’t.”

After telling @bailzherb and her friend not to “worry about it,” the man admits his guilt by saying he’ll delete the pictures. His attempt to flee is interrupted by the women, who loudly inform him that “it’s really weird to take pictures of females in public without their permission so you should never do that again.”

This finally prompts the man, still fumbling through explanations, to pull out his phone. He assures the women he will delete the photos at a later time, but @bailzherb and her friend insist he delete the pictures in front of them. @bailzherb’s friend steps up close, counting a total of five pictures of the women on his camera roll. She insists that he “delete them” from both his camera roll and trash bin before shifting the camera upward to reveal his face.

“Is this somebody’s dad that takes pictures of females in public,” she asks, as the man protests in the background. “No I’ll call you out any day because that’s fucking weird. Don’t ever do that again.”

Viewers applauded the women’s gumption in the comments, many noting that they wouldn’t have the courage to confront a strange man in a public place.

Others noted the potential of a trafficking situation, and celebrated the women for calling the man out publicly. “It’s called scouting and and you were very smart to expose him,” user Ashley Sexton wrote.

Not everyone agreed the situation was so dire, but nearly everyone—apart from the rare commenter attempting to defend the man’s actions—heaped praise on the women for standing up for themselves.

Others noted that the man appeared to be married, given the prominently displayed wedding ring on his finger. Commenters voiced their desire that “his family sees this,” and reveled in the man’s evident embarrassment.

“EMBARRASS THEM WITHIN AN INCH OF THEIR LIVES,” one commenter urged. “He lied and gaslit and shushed you.”