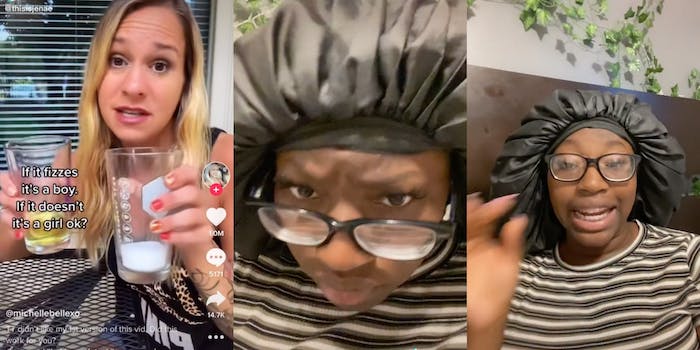 ‘That is vile’: TikToker flamed for peeing in drinking cup to find out baby’s gender

'Girl not in a DRINKING glass.'

Bartender and TikToker Michelle Charlotte faced harsh backlash and straight-up disgust from viewers after peeing in a cup for an unconventional pregnancy gender test on TikTok.

Michelle experiment yielded no fizz, so she concluded she’ll give birth to a baby girl. “We’ll find out next week,” she said.

Viewers were aghast, however, that the TikToker used what appeared to be actual drinking glasses for the challenge.

“You peed in one of your DRINKING GLASSES???” one viewer commented.

Another wrote, “Girl not in a DRINKING glass.”

One fellow TikToker, Jenae or @thisisjenae on the platform, was so disgusted that she stitched Charlotte’s video with her own take on the challenge.

“This is exactly why my mom told me not to eat at everybody house,” she said.

Although confused why Charlotte decided to urinate in her drinking glasses, Jenae said she was willing to forgive and forget the action until she checked the comments section and saw Charlotte actively defending her decision of equipment for the experiment.

In response to a comment questioning why she peed in her glasses, Charlotte wrote, “Haven’t y’all heard of washing glasses? Nothing some hot water and dish soap can’t clean.”

“I don’t care if you boil that glass in bleach and vinegar; if I came to your house, and I found out I drank out of one of the glasses you pissed in, I’m getting charged with assault and battery,” she said. “That is vile.” Jenae’s vehemently agreed.

“Nah she’s absolutely ATROCIOUS for that,” one user said.

A different TikToker commented, “No I’m literally shocked…….. and the people defending her in her comments?!?!?!?!?!???”

Several other users called out questionable habits they’ve seen observed in others, and some folks blamed Charlotte’s behavior on her whiteness.

“They refuse to wash their chicken and say it make their sink dirty, and don’t even wash their legs, and we’re supposed to TRUST THEM?!?!” one person said, referring to a viral debate in 2019 about shower habits.

“Dude, I found out popcorn bowls and big pots are the ‘throw up bowls’ for families,” another user commented.

“Man they don’t care, they be french kissing their dogs,” someone else said.

Charlotte and Jenae did not immediately responded to the Daily Dot’s request for comment.