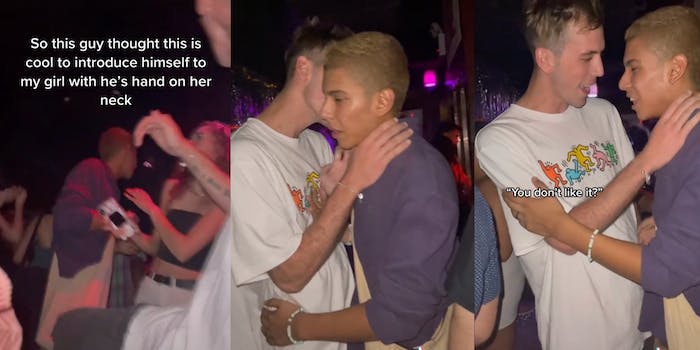 ‘Now he’ll think twice before doing that to another girl’: TikTok shows man putting hands around woman’s neck, her boyfriend decides to return the favor

After a guy at a party got handsy with his girlfriend, one TikToker decided to return the favor so the man could understand how the woman felt.

Daniel, or @danielkord, says he turned around to put his phone down for just a moment. But when he turned back to his group, some stranger had his hand on his girlfriend’s neck in an attempt to flirt. The girlfriend was already handling it, shoving the guy off of her by the time Daniel realized what was going on. However, Daniel didn’t want to leave it at that.

He let some time pass, then gave his girlfriend instructions to record as he went to find the guy.

“I had to wait a little while so he’s not going to have any correlation between what he did to this girl to what I’m going to do to him,” Daniel said in a video explaining how the incident came about.

In footage from that night, he approaches the guy and immediately gets touchy, caressing his shoulder with one hand and putting his other around the man’s neck in a similarly flirty manner.

“I was just assuming he likes this too,” he wrote over the video. “What, you don’t like it?” he asks the culprit.

The guy clearly looks uncomfortable and pushes Daniel away before leaving the area.

“I wanted him to really feel like this random guy was going and trying to flirt with him and doing that by grabbing his neck, and then how he’s going to feel about that,” Daniel said in a follow-up video.

Comments were torn between mostly women congratulating Daniel on showing the guy how his girlfriend felt and mostly men insinuating Daniel was just hitting on the guy himself.

“Of course all the men in these comments don’t understand that being grabbed by the throat is very uncomfortable,” one TikToker wrote. “He needed to understand that it’s not.”

“Maybe now he’ll think twice before doing that to another girl,” another said.

The video has already been viewed over 350,000 times in less than 12 hours, during which internet sleuths tracked down the other guy, who sent Daniel an apology for flirting with his girlfriend—but not for making her uncomfortable.

“My bad putting my hands on ur girl had no idea u were with her. No disrespect, I was going in for a kiss and that’s why I put my hands on her face,” the guy wrote. “If I knew you were with her, I wouldn’t have even talked to her.”

Whether or not a woman is in a relationship has no impact on how inappropriate it is for some stranger to walk up and try to kiss her, and Daniel wasn’t about to let this message excuse the guy’s actions.