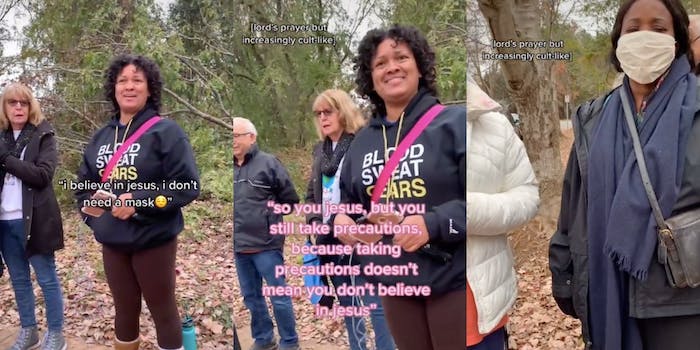 If the coronavirus pandemic has taught us anything, it’s that there’s no shortage of mask-denying evangelicals. One TikToker learned that the hard way when she confronted a group of anti-mask “Karens” and subsequently found herself caught in the middle of their prayer circle.

The video, uploaded by TikToker @loveurmother (who goes simply by Reiley on her account), has earned more than 2.4 million views since it was uploaded four days ago. It appears to have occurred at the same time and place as the clash between pro-choice and anti-abortion protesters that @loveurmother documented last week when she turned the phrase “Sky Daddy” into a viral sensation.

The video begins with the Christian women rebuking Reiley in the name of the Lord after she apparently admonishes them for not wearing masks. “I believe in Jesus, I don’t need a mask,” the head Karen says.

“OK, well, you believe in Jesus. Do you wear a seatbelt?” Reiley counters, to which Karen replies in the affirmative. “You wash your hands after you go to the bathroom?” Reiley asks, earning a nod from Karen.

This should have been a mic-drop moment, but the Karens have no taste for sound logic. Instead of conceding to Reiley’s point, the head Karen gives her a dead-eyed smile as she and her companions break into the Lord’s Prayer.

“Your kingdom come, your will be done, on Earth as it is in Heaven,” they say in unison as the video ends.

“help these people r literally insane they surrounded me in a prayer circle after this,” @loveurmother captioned her post with the hashtag #christok.

A follow-up video shows the women laying hands on Reiley and praying for her despite her declining their invitation. The women form a circle around her and being praying for Reiley as she stands in disbelief and murmurs, “Uhhh.”

One commenter described the Karen crew as “the walking dead,” a joke that perhaps rang more morbid than funny, considering they were standing within inches of @loveurmother and speaking loudly without masks in the midst of a pandemic.