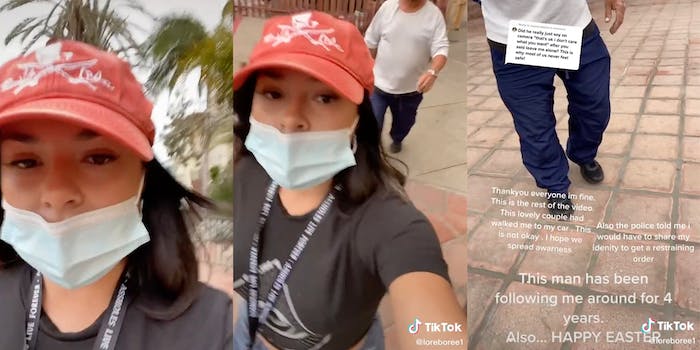 'You can film me all you want.'

A TikTok video shows a man persistently following a woman in Huntington Beach even as she films him.

User @loreboree1, an influencer who boasts 43,000 followers, posted the video. She appears to be walking around an apartment complex in Huntington Beach, California. The man apparently refuses to leave the woman alone, even as she repeatedly requests that he stop following her.

“You can film me all you want,” the man says. The woman, walking fast, continues demanding he leave her alone and says she’s filming him for proof.

“Just talk to me for two minutes, and I’ll leave you alone,” he says.

“Why do you dress like this?” the man continues. “Are you a prostitute? I’m serious.”

In a second video, the TikToker directly tells the man to “stop stalking me.” In the comments, she added that the man was following her around 7:30am.

“I can’t live here anymore because you stalk me,” she says to the man.

The overlay says that the man has been following her around for “four years.” Another text says a “lovely couple had walked [her]” to her car.

“This is not OK,” she says. “I hope we spread awareness.”

She adds that she contacted the police and is pursuing a restraining order against the man. The Daily Dot could not independently verify whether or not there was a police report filed, and Loeboree1 did not respond to a request for comment.

As of press time, the video has 2.8 million views, and its follow-up boasts 1.5 million views. Seven News and Sydney News Today also reported on the video.

“Did he really just say on camera ‘that’s OK, I don’t care what you want’ after you said leave me along?” wrote one commenter. “This is why most of us never feel safe.”