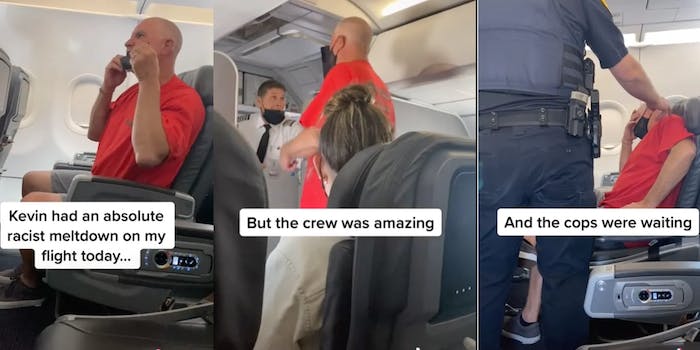 'Mental health care is severely lacking in the U.S.'

A TikTok showing a man on an American Airlines flight from Los Angeles to Salt Lake City trying to get off of a plane mid-flight was posted Monday. The TikToker dubbed the man a “Kevin,” or male Karen, but many are assuming he was going through some kind of mental health crisis.

The passenger, 61-year-old Timothy Armstrong, was escorted off the plane by police and was cited with public intoxication and disorderly conduct upon landing, reports KUTV.

The TikToker, Dennis Busch (@funnydenny), posted the TikTok with the caption: “God bless flight attendants and pilots for what they have to deal with.”

The video shows the man growling and violently putting on his own mask for several seconds. He then gets up and starts arguing with a flight attendant.

“We’re landing,” one flight attendant can be heard saying as the man stands in the aisle.

The crew then tries to explain to him that they have not yet landed, but he disagrees: “We’re already grounded!”

“Sit! Do you see anyone else getting up? Sit!” the flight attendant says.

The man then backs up, stumbling, toward his seat while continuing to berate the crew members.

“Joe Biden! Really?” he yells as he finally sits.

The video then cuts to a later time showing the man sitting in his seat with his head in his hand slowing saying the following:

“Sorry. But that’s what they think of America. They think that it is a disgrace.”

Police officers then enter the frame and tap the man on the shoulder.

“I think of America as not a disgrace,” he continues.

“Hey buddy,” an officer says while trying to get his attention. The man repeats what he said before.

Finally, one officer grabs his wrist and pulls him out of his seat, saying, “let’s go.”

“Really?” the man yells over and over.

“I just was watching the guy because we were unsure what was happening and I just thought in case something does happen here, I want to record this. He would get up out of his seat, that really put people on edge, we didn’t know what he was doing,” he said.

The Daily Dot reached out via TikTok to speak with Busch but has not yet received a response. The overlay of the video says Armstrong was being racist, but nothing on the captured video indicated this.

Many people in the comment section were mainly concerned with Armstrong’s mental health and wellbeing since it appears he is not just intoxicated but possibly having a breakdown.

“Mental health care is severely lacking in the US,” said @philipackerman37.

“I think this is actually someone going through psychosis,” wrote @totocommapeter.

“Oh this is actually so sad the longer you watch this. People need better access to health services,” commented @laurenhoweyoudoin.

Busch commented on the post saying he would be on live today at 5 pm MT to discuss the incident.

According to KUTV, American Airlines issued a statement on the incident:

“American Airlines flight 1802 with service from Los Angeles (LAX) to Salt Lake City (SLC) was met by law enforcement upon arrival at SLC due to an unruly passenger. The flight landed safely at SLC where local law enforcement removed the disruptive passenger from the aircraft. We thank our crew for their professionalism and our customers for their understanding.”