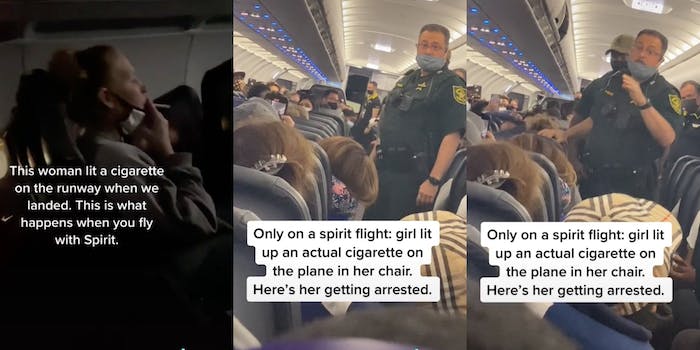 A viral TikTok shows a white woman dubbed a “Karen” getting arrested on an early-morning Spirit Airlines flight for lighting a cigarette.

The footage, posted by TikTok user Alexa Majdalawi or @heyalexa_nah, has garnered 11 million views and almost 30,000 comments as of Sunday. The on-screen caption read, “Only on a spirit flight: girl lit up an actual cigarette on the plane in her chair. Here’s her getting arrested.”

The TikTok shows several passengers shocked at the Karen, while another Black passenger yells for security to come and remove her from the plane. Smoking on airplanes has been totally illegal in the U.S. since 2000.

“Come get her please, bro, because she’s holding us up,” the woman yelled. “Someone call 911, please get her. She’s fucking up our flight.”

Two security guards approached the Karen in the plane, who then appeared to be pretending she was asleep.

The Black woman continued to yell, partly to instruct the guards how to handle the situation and partly to complain about the delay. One of the guards appeared to become annoyed, turning to pull his face mask down and snap at the woman, “I know you don’t believe this but we can actually do this without your assistance, so just hold on OK?”

The security guards then escorted the Karen off the plane.

Viewers were disgusted that security seemed more annoyed at the Black woman than the actual Karen, and many applauded her for speaking up.

“He gave more attitude to the person who didn’t light a cigarette on a plane…” one viewer pointed out in the comments.

Another said, “I love how the cop is still ruder to the Black lady than the white one who broke federal law.”

Another TikTok from a different user, which Majdalawi dueted, shows when the Karen actually lit the cigarette. As she lit it, Majdalawi can be heard asking, “Um, can you not smoke cigarettes right now?”

The Karen replied, “It’s been a long day.”

Majdalawi gave a longer story update in another TikTok, where she gladly announced that she “survived” the situation and made it home safe.

She said the incident occurred after the flight had landed, but the plane was stalled because they were waiting for another plane to leave its gate. Then the Karen, who was right in front of Majdalawi, lit the cigarette and began blowing smoke behind her.

According to Majdalawi, the flight attendant was about four rows ahead of them, saw it happen, and did nothing. So Majdalawi spoke up and asked the Karen to put the cigarette out.

Finally, another flight attendant walked by, and Majdalawi asked her if she could move to the back because it obviously smelled like cigarette smoke in her current seat. Majdalawi said she has asthma and didn’t want to have to use her inhaler on a plane while wearing a face mask.

The flight attendant asked the Karen if she had just smoked a cigarette, and she said no. Then, everyone else around her blew up, calling her out for smoking and lying.

That was when the incident from the original TikTok happened.

“This is like the craziest flight story I’ve ever had in my whole life,” Majdalawi said.

She also said she’s never going to fly Spirit Airlines again—the cheaper flight wasn’t worth it for her.

The Daily Dot reached out to Majdalawi and Spirit Airlines.