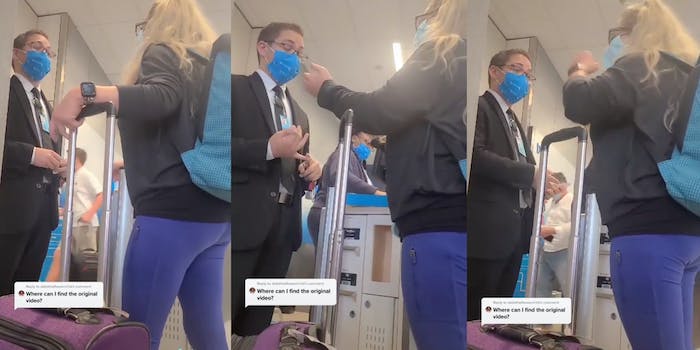 ‘I’d suggest Spirit’: American Airlines employee refers ‘Karen’ to different airline after she allegedly called one of his workers a ‘b*tch’ (updated)

'My man absolutely murdered her in broad daylight. What a legend.'

It is exceedingly rare to see a Karen get put in their place for all the world to see, but a recent TikTok provides a view into just that.

Uploaded by flight attendant @chrisisflying, the viral TikTok is providing a dose of sweet, sweet catharsis for viewers. The video, uploaded on July 20, has earned nearly 6 million views in less than 24 hours. A second upload featuring the entire interaction added hundreds of thousands more views to Chris’ count, and the video even spread to Reddit, where viewers are soaking up the stellar customer service provided by an airline employee.

The video sees a tense interaction unfold between an airline employee and an irate Karen. As it begins, the employee—who appears to work for American Airlines—is politely detailing why the woman will no longer be welcome on her planned flight. It appears to have begun over a mask dispute. The woman apparently lost her temper and lashed out at an employee. In the video, the man notes that the woman called his employee a “bitch,” which he says is “entirely uncalled for” and “inappropriate” before informing the woman that she will not be flying with the airline.

“We don’t tolerate that crap, with us, at all,” the employee says, before inviting Karen to “find another carrier to fly. I’d suggest Spirit.”

The woman then attempts to explain her side of things, but the airline employee is not having it. Karen denies having called the man’s employee a bitch, despite there being multiple witnesses, and expresses exasperation over the situation she created. Her repeated attempts to switch the narrative fall on deaf ears, however, as the man informs her that “if you don’t want to follow a federal mask mandate, and on top of that calling a vulgar name to my employee, it’s not going to happen.”

Viewers are absolutely eating up the viral exchange. People flooded the comment section of both Chris’ uploads, along with the Reddit version, with requests for the employee’s information so they can help him gain a well-deserved raise. Most responders seemed to agree that the man is an employee of American Airlines working at the Dallas/Fort Worth International Airport.

Other commenters found themselves stunned by the employee’s level of professionalism, paired with numerous savage burns. “This man is professional to another level,” one viewer noted, while another commended his “roast of a lifetime.”

Other commenters heaped onto the employee’s merciless takedown of Spirit Airlines, dubbed the “Walmart of the sky” by viewers.

“My man absolutely murdered her in broad daylight,” one commenter wrote. “What a legend.”

American Airlines, and its stellar employees, definitely got a boost thanks to the video. People shared their heightened respect for the airline in the comments, with many noting their intent to fly American next time they need to catch a plane.

Update 12:08pm CT, July 22: When reached for comment a spokesperson for American Airlines told the Daily Dot in a statement: “We expect our customers to comply with our policies and treat everyone with respect when they choose to travel with us, and we take action when that is not the case.”

The Daily Dot has reached out to @chrisisflying.