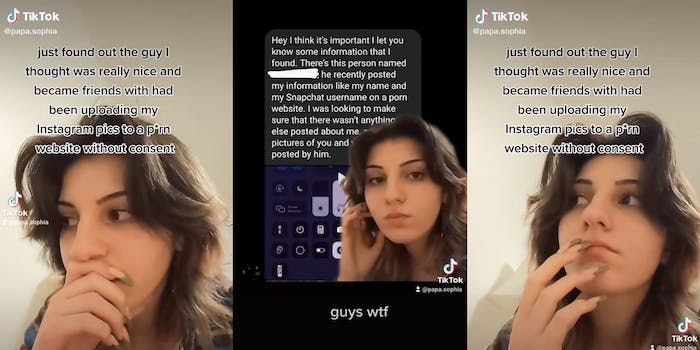 In a TikTok posted on Jan. 23, Sophia (@papa.sophia) says that her male friend posted her Instagram photos on a pornography website “without consent.”

“Men are gross and I have trust issues now,” the TikToker wrote in the caption of the video, which received over 4,800 views. In the video’s comment section, Sophia wrote that the male friend “went to [her] school.”

Her video also shows a screenshot of a text she received from another woman alerting her that the man posted Sophia’s photos on the site. The woman said the man posted her name and Snapchat username on the site as well.

The TikToker, who is 20, told the Daily Dot in an Instagram message that the photos posted were not sexual or intimate.

“He just took screenshots from this Instagram account and posted them on there,” she said. “Which I found odd.”

She also said that she confronted the man who uploaded her photos and that he didn’t respond.

A commenter on the TikTok video advised @papa.sophia to take legal action.

“Press fucking charges,” wrote @goblinonastring. Sophia told the Daily Dot that she has not contacted the police.