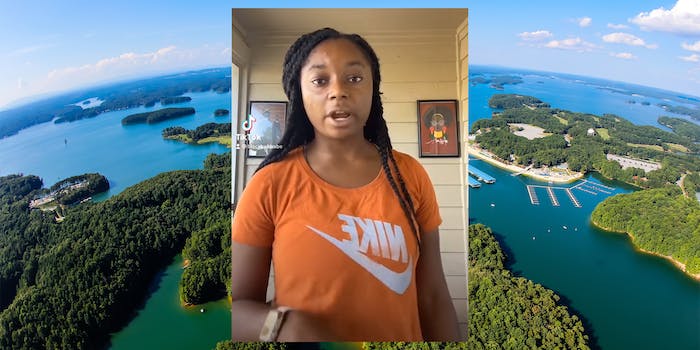 ‘Don’t even drive by there’: Black TikToker explains the racist history of infamous ‘haunted’ lake

A Black TikTok star is shedding light on the racist treatment of a community in Georgia after a body been discovered in a lake that was built on the community’s land. Lake Lanier reportedly has a reputation for mysterious deaths.

TikToker @blackbeltbabe, real name Monique Sampson, has more than 218,000 followers and has been sharing videos following the news that a 19-year-old’s body was found in Lake Lanier. The teen went missing while he was swimming on Thursday in the 44-mile reservoir in Georgia.

“I hope people will learn about the thriving Black community that paid the ultimate price of losing their community simply because the city wanted to build a lake,” Sampson told the Daily Dot about why she shared her videos. “It is my hope they won’t be forgotten.”

She said in her video that 675 people have drowned or disappeared in the lake since 1957.

Sampson told the Daily Dot that she didn’t know about the legacy of the lake until her brother “almost drowned” in a jet ski accident after her family moved to north Georgia when she was 15.

“When describing the experience he said he felt as if he was being pulled down by something,” she said.

“Stay the heck away from Lake Lanier, period,” Sampson warned her viewers in one TikTok video on Sunday. “Don’t even drive by there.”

“The real story of Lake Lanier is something that is more dark and more cynical than you’ll ever learn,” Sampson, who teaches American history in Jacksonville, Florida, says in another video.

The video shows a beach that Sampson describes as fun—before she drops the truth bomb.

In 1957, the U.S. Army Corp wanted the land that, at the time, had a “thriving” Black community, Sampson said in the video. She says the community had a racetrack, farmland, and convenient stores.

“[The Army Corp] drove residents out of the space, demanded that they leave and decided to flood the entire area where the residents were,” Sampson said. “It was absolutely horrible.”

She shared news clips of what was discovered under the lake: Forestland, farmland, old homes, barns, and a racetrack allegedly surfaced during a drought.

“This was stadium seats,” Sampson says in the next video, highlighting the success of the Black community in the area. “They had all of these different amenities that they built for them, by them. The U.S. Army Corp came in and decided they wanted to build Lake Lanier at the expense of the Black community that was thriving.”

The “haunted” reputation of the Lake is nothing new; it has been extensively covered by travel blogs, CNN, Newsweek, which report its reputation as one of America’s deadliest lakes.

News articles about the lake, however, don’t mention the lake’s displacement of the Black community. The CNN article only mentioned that the lake displaced indigenous communities.

“Often times people white wash history because telling people the true history of this country makes many people uncomfortable,” Sampson told the Daily Dot. “I always say that if we don’t learn the good, bad and ugly we are almost destined to repeat the ugly. “

Sampson’s videos about the lake and her belief that it’s “haunted” have hundreds of thousands of views.

“You can’t just flood an entire city of people and think that the ancestors won’t pay back that misdeed in full,” Sampson said. “I believe in karma … a thriving Black community paid the ultimate price.”

On Twitter, it was clear that the lake’s negative reputation is well-known to Georgians—and even some people from out of state.

“I’m not from Georgia but I know not to take my ass to Lake Lanier,” one user wrote.

Other social media users noted that Lake Lanier’s history would make it an ideal backdrop for a horror film or TV show.