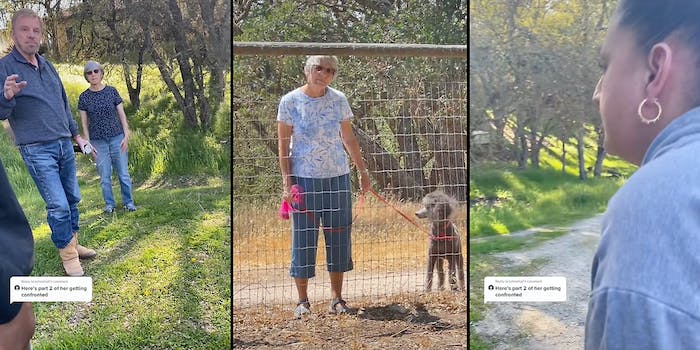 ‘Just trying to use the dog park’: TikTok shows confrontation between Black TIkToker and ‘Karen’ neighbor

'There will always be a white person all up in your business.'

In a viral video posted Thursday, TikToker @johnehall alleges that a white woman, now being labeled a “Karen,” told the Black woman that she was not allowed to use the dog park.

In the video, the white woman walks her pet poodle and talks to the young woman in the park.

The caption to the video says, “Just trying to use the dog park behind my house that I’ve use for years. she says IM not allowed to use it.”

Although you can see the white woman talking, it’s unclear what she’s saying because the TikToker added a voiceover.

“When you’re Black, you’re never really lonely,” the TikToker says, “because there will always be a white person all up in your business.”

In a follow-up video posted last Friday, the white “Karen” and another man are talking with people who appear to be the TikToker’s family.

“You need to stop harassing my kids, stop videotaping them, stop calling the police on them,” a woman in the video says.

“Do not send me any more cards in the mail apologizing for your actions and the way you act towards my children,” she adds.

Because the incident was not caught on camera, nor was the incident fully explained by the TikToker, many in the comments left their thoughts about what they think happened.

User @SpideyCystLady said, “I feel so bad for the dogs and kids that belong to miserable people like that cause they never get away.”

Referring to the voiceover, @shilohmama53 said, “It has nothing to do with race. Karen’s come in all shapes and colors.”

Conversely, user @sdalton34 added, “I was all for you until you had to make it ‘white people’ now I’m on Karen’s side.”

The term “Karen” has increasingly been used to refer to white women who exemplify white privilege. Oftentimes, Karens belittle Black people or other people of color by calling the police or saying that they’re in “danger,” all while claiming to be the victim.