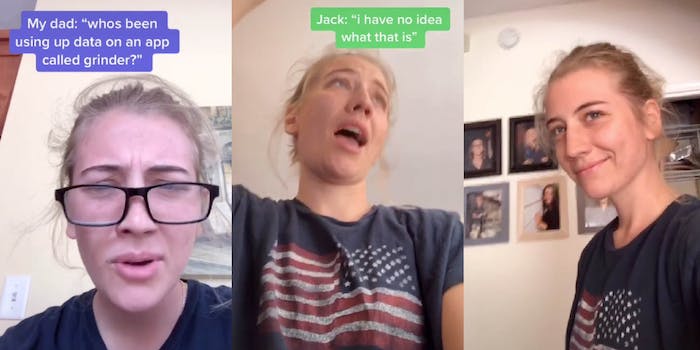 The video-sharing app is experiencing a particular surge in popularity thanks to the millions of people worldwide self-isolating in hopes of slowing the spread of coronavirus (COVID-19). Despite the heaps of content on the site, an occasional, rare TikTok shines above the rest. Such is the case with user @epipen7246’s recent TikTok. Her carefully crafted video reenacts the moment she saved her brother from being outed to their father, and people can’t get enough.

In the video, epipen7246 takes on the roles of herself, her brother, and their father. The brief video begins with her brother, Jack, clearing out the dishwasher. A few rooms over, their “dad” is looking over the family data plan. Coming across an apparently unfamiliar app, he calls to the other room. “Who’s been using up data on an app called Grindr,” epipen7246, as her dad, questions the household at large.

Jack, still dealing with the dishes, suddenly realizes what is about to happen. He freezes, midway through the task, and tries to think of a way out of it. “It says Grindr,” their dad calls again from the other room. “What even is Grindr?” Desperately, Jack attempts to cover his tracks and denies any knowledge of the app.

That’s when our heroine, the protagonist of this tale, steps up. One room over, she can hear the conversation unfurling. Horror washes over her as she realizes the situation her brother is about to be in. Their father appears to be losing patience. He again demands answers about the mysterious app using up all of his data. Jack is fumbling, desperate, and running out of excuses.

That’s when his sister swoops to his rescue. She comes bursting in from the other room. “It was me,” she announces. “It’s my workout app.”

The internet was all over the video, lauding it as a “masterpiece.”

Another user proposed it as an Oscar nominee in several categories. “Best Cinematography, Best Documentary long and short form, and Best Ally,” they wrote.

She at least deserves to win sister of the year.