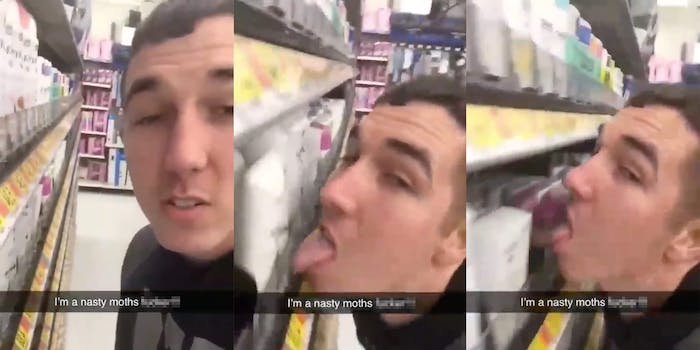 He's being held in jail without bond.

A TikTok user has been arrested for making a terrorist threat after posting a video of himself at a Walmart, licking the products and saying, “Who’s scared of the coronavirus?”

The TikTok user was identified as 26-year-old Cody Pfiser from Warrenton, Missouri, according to WTIC-TV. He was charged on Tuesday with a low-level felony of “making a terrorist threat.”

The Warrenton police were made aware of this video after it made its way around the world. Complaints to police came from as far as Ireland, the Netherlands, and the U.K.

In a statement on Monday, the department said, “We take these complaints very seriously and would like to thank all of those who reported the video so the issue could be addressed.”

According to the Riverfront Times, Pfiser “has previous convictions for burglary, theft of a firearm, drug possession and driving while intoxicated.”

He is being held in jail without bond.

It’s not the first arrest made after someone licked objects during the coronavirus pandemic. Last week, a store manager in Wisconsin called the police on a woman who licked a door handle to “protest the virus” as the manager was disinfecting the store.

At the time of writing, there were 59,502 confirmed cases of coronavirus (COVID-19) in the U.S. All over the country, businesses have shut down, and citizens have either been mandated or volunteered to self-isolate to prevent the spread of the disease.