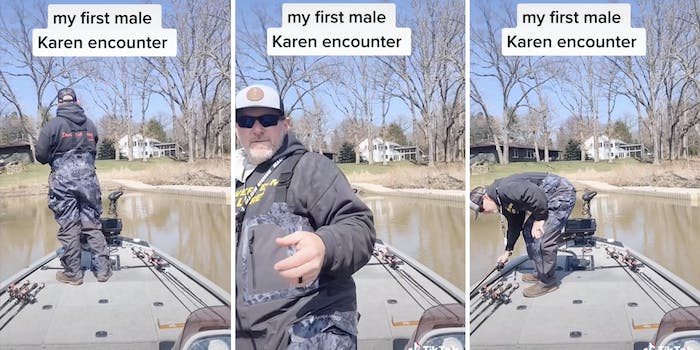 ‘You handled that like a champion, sir’: Male ‘Karen’ tells fisherman that river in front of his house is ‘private property’

The fisherman kept his cool.

A viral TikTok shows a fisherman having his “first male Karen encounter” while fishing on his boat in a river, which a man says is private property.

The clip was posted on Wednesday and by Monday had more than 10 million views. The video shows Sean Riley (@seanrileyhunt49) fishing on his boat in front of riverside houses. A man off-camera says to Riley: “Sir, you’re on private property… Will you please take it back out to the river?”

“This is private property,” replies the other man, who Riley called a “Karen.” “All of these are privately owned.”

“No they’re not, this is all navigable water,” Riley says.

“If you don’t get out of here, I’m calling the police,” the man fires back.

“Call the police, call the game warden,” Riley says. “I’ve dealt with them before.”

The man says he’s calling authorities “right now” and calls Riley an “asshole.” Riley repeats that the water is not private property.

“There’s our fucking boat dock right there,” the man says.

“I’m not on your boat dock,” Riley says while continuing to fish. “I’m in the water.”

As of Monday, the TikTok has over 10.5 million views.

Courts often rule in favor of rivers being navigable, or open to the public, but it’s ultimately up to state laws. For many, the privatization of natural resources that have been used for centuries, especially by Indigenous peoples, is “chilling.”

In the comments, TikTokers cheered Riley on for keeping his “composure the entire time.”

Riley wrote, “I thought I was being pretty dang quiet, and people make it seem like I’m 3ft from his house..guy wasn’t even outside when I made the first cast.”

“Most people would be like hey man you catching anything ?” one TikToker wrote.

“You handled that like a champion sir,” one user wrote.

In a second TikTok clip, a person who appears to be a police officer tells Riley, “You’re all set. You’re not doing anything wrong so you’re fine.”

“Have a good one,” Riley says before boating away.

The Daily Dot reached out to Riley via TikTok comment.