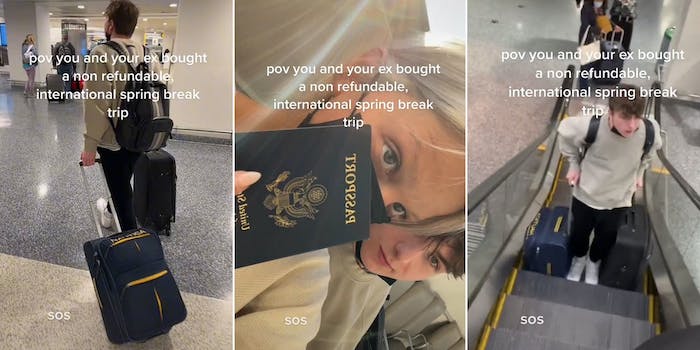 ‘$20 they get back together’: Woman goes on non-refundable spring break trip with ex-boyfriend in viral TikTok

A TikToker has gone viral after documenting a non-refundable trip to the Caribbean she took with her ex-boyfriend.

Posted by user Lydia (@lydia_bird3), the clip shows her ex-boyfriend Jaeden carrying bags through the airport. In the overlay text, Lydia writes, “Pov [point of view] you and your ex bought a non refundable, international spring break trip.

Initially, TikTokers found humor in the situation and predicted the trip would end with Lydia and Jaeden back together.

“Is he supposed to take the photos on vacation now?” one user asked.

However, as Lydia posted more videos from their time together, users became suspicious about whether Lydia and Jaeden were actually exes. In a follow-up TikTok with 4.8 million views, Lydia said the exes’ request for two separate beds was denied and caused a major disagreement.

“Why do I feel like they still in a relationship, but they’re just doing this for the clout?” questioned a commenter.

“This def for clout no one can change my mind,” added another TikToker.

Despite the skepticism, it would appear Lydia and Jaeden are actually exes—if posts from Lydia’s other TikTok account, @dumbblonde493, are to be believed. In a TikTok posted on Feb. 8 of this year, Lydia addresses Jaeden as her “ex,” though the caption reads, “Never trust when i say we only friends.”

Lydia posted TikToks identifying Jaeden as her ex as recently as Feb. 28.

In an interview with Daily Dot, Lydia confirms that the events played out as they appeared in her TikToks and Instagram posts (@lydia.bird).

First, Lydia provided some background on her peculiar situation.

“So my ex-boyfriend, Jaeden and I were together for 2 years,” she tells Daily Dot. “A few months ago we booked a trip through Cheap Caribbean to the Dominican Republic for spring break. As I later found out, we did not purchase any travel insurance because we had no anticipation of breaking up. However, we broke up a little over a month ago.”

Lydia says she took pains to change the reservation, including trying to pay her half and give the tickets to Jaeden. However, as she tells Daily Dot, “He persuaded me to go because it was an exciting opportunity.”

Eventually, the ex-couple went on the trip and posted the original viral TikTok together before they departed.

“I was aware [of the TikToks] the entire time,” Jaeden (@jaeden.lemelin) tells Daily Dot. “We posted [the first TikTok] before our flight, and when we got off it had over 4 million views.”

Lydia and Jaeden’s Instagram accounts both include pictures from the same location in the Dominican Republic.

The exes look back on the experience fondly. Lydia says it was “perfect,” with Jaeden adding that the trip was “amazing.” As Jaeden tells it, “We dated for almost two years and just recently broke up so it really wasn’t awkward at all.”

For everyone rooting for the ex-couple after all of their posts about the trip, both Jaeden and Lydia have some bittersweet news. They’re not a couple again—but they’re content as friends.

“There were multiple arguments which left things a little rocky,” Lydia shares. “However, I do believe exes can still be friends and have a good relationship… Friendships and working through issues can result in the past relationship becoming a friendship.”

Jaeden agrees. “I wouldn’t say we are the best at the moment,” he says, “but we’re always gonna be close and friends.”