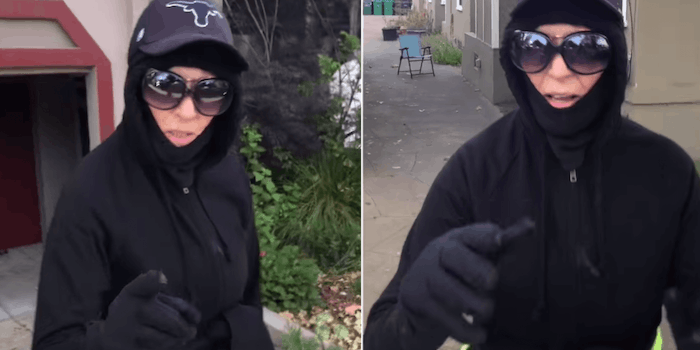 ‘Karen’ allegedly told a Black man ‘to go back to Oakland’

He confronts her in a viral video—and people online think it's 'hilarious.'

A video has surfaced of a Black man confronting a white woman after she reportedly verbally attacked him and gave him the finger.

“You tell me to go back to Oakland right?” he asks the woman in the video. According to his Facebook description of the video, the woman yelled at him to “go back to Oakland” as he was biking in Alameda, California. He ignored her. Then he encountered her again that same day, and she allegedly gave him the finger.

In the video, the woman doesn’t say anything to his question, and tries to turn away.

“Let me tell your dusty, dirty, dingy mannequin ass something: You don’t tell me where the fuck to go!” Marshall says from behind the camera.

As he is talking to her, she keeps pointing fingers at him and saying, “Language, language, respectful language.”

She does not deny allegations that she told him to “go back to Oakland.”

“So you don’t tell me to go back to Oakland, you take your racist p*ssy ass to Oakland,” he says.

“Get your funky mask ass to Oakland!” he continues. “You got a whole COVID-19 fit on. …You the reason why this sh*t is here”

As he continues, she says, “You’ve been talking for a minute! Can you control your mouth for one minute?” She then gestures a zipped mouth.

“You can control your ass ’cause it stink!” Marshall responds. “You need to get a wheelchair.”

“I am 80 years old!” the woman says at one point, seemingly as a defense.

“Your age don’t matter!” Marshall says, “You seem like you’re racist. You see me riding by, and you tell a Black person to go back to Oakland!”

The woman continues to walk while sporadically turning to Marshall to respond.

“Ain’t no Black people in Alameda?” he asks.

When she tries to mitigate what she said by saying there are “more white people” in Oakland, Marshall responds, “Don’t tell no Black person to go back to Oakland. You can’t tell me where to go alright?”

The video then ends. It has received 96,000 views since being posted on Tuesday, garnering many angry reactions and some reactions of people who found his response hilarious.

“He cracked me up! This lady just needs to quit talking and just mind her own business,” wrote a commenter.

“Yoooooo I appreciate u I haven’t laughed like that in a while u made my day I watched this over and over I been through this plenty times and just curse then out but u shut that bitch DOOOWWWNNNN I applaud you my brother,” wrote another.

The Daily Dot has reached out to Charles Marshall.

The video appeared as widespread protests continued across the country over the police killing of George Floyd. Floyd’s death coincided with an incident of a white woman threatening to call the police on a Black man after he asked her to put her dog in a leash, as per the rules, at Central Park in New York. The incident further sparked conversation, alongside the protests, about white women’s micro-aggressions and racism against Black men. The micro-aggressions and racism they exhibit are not usually physically violent but can result in Black man losing his life.