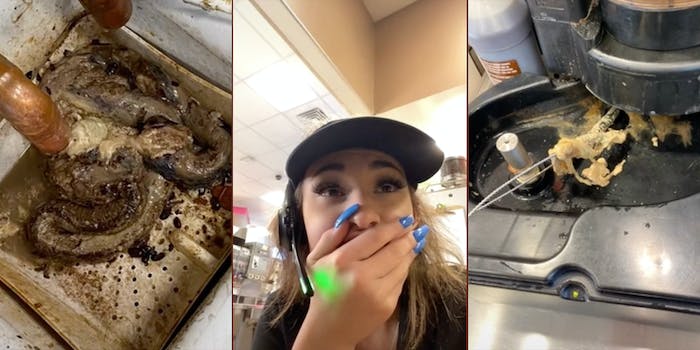 The TikToker says dirty pipes are 'just the beginning.'

In a now-deleted video, a TikToker revealed the “nasty” clogged pipes at the Dunkin’ location where she works.

The video, which was posted by @kaelin_1088 and sat at almost 100,000 likes before being deleted on Tuesday, showed several images of what people believed were the frozen coffee machine covered in grime and mold.

TikTok users were taken aback by this imagery, with many voicing their shock, surprise, and disgust in the comments.

“No wonder my stomach be tore 10 mins later,” remarked one user.

“Glad i don’t drink the frozen coffees anymore,” wrote another.

But Kaelin says that viewers misunderstood her video. The gruesome photos actually came from a clogged pipe in the kitchen, and customer drinks would be unaffected by this. This explains comments from people who said they work at other Dunkin’ locations who noted that it was policy for them to clean their coffee machines. Kaelin told the Daily Dot that she cleans the machine whenever she can, which is usually once per day or more.

“When I worked there before I quit we had to deep clean everything before we went home at night,” one user said.

“As a manager, ours does not look like that,” another TikToker wrote. “Its supposed to be cleaned every 4 hrs, thats ur managers fault lmao.”

Kaelin has since posted two follow-up TikToks explaining the situation further, noting that the store recently passed all health and safety checks.

Kaelin told the Daily Dot that dirty conditions are not the fault of individual workers. Rather, they’re indicative of larger issues facing workers today.

“It’s a rough industry,” she told the Daily Dot. “Lots of stores are understaffed and don’t have much money. We’re overworked and underpaid.”

And for viewers who think that workers not getting enough time to clean machines is bad, Kaelin reminds readers that the reality of working in food service today involves more than just long, loaded hours.

“There’s a whole lot more,” she said, going on to discuss jobs with incidents of wage theft, bans on eating on the clock, alleged abuse of workers, and more. Kaelin told the Daily Dot that dirty pipes are “just the beginning.”

The Daily Dot reached out to Dunkin’ via email.