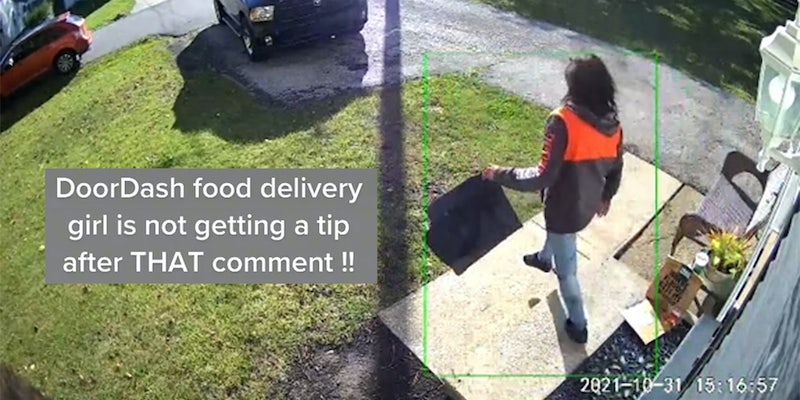 'You really gonna cost someone their job.'

TikTok user Jay Manubi (@jaymanubi) posted security camera footage of a DoorDash food delivery driver, or “dasher,” knocking on the door. The TikToker said the dasher called out “you’re so fat,” as they dropped the order off on the front porch, prompting a debate in the comments section. The video acquired 1.3 million views by Monday.

According to text overlay on the security footage, Manubi decided not to tip the dasher after watching the footage. However, many commenters argued that they heard the dasher say something completely different from Manubi’s allegation.

Commenter @feltcerebrum said, “She definitely didn’t say that. You can tell just from the way she says it that she was just telling you the food was outside.”

However, several commenters agreed with Manubi, pointing out the insensitivity of the alleged comment.

“I’ve delivered some pretty big orders as a driver. Does she not realize some people order for a family?” one commenter asked.

Another user wrote, “How are y’all hearing ‘food’s outside,’ or ‘it’s DoorDash?’ I’m hearing something mean LOL.”

While the comments don’t come to a consensus on what the dasher actually said, many disagreed with Manubi’s decision to not tip and pointed out that they could lose their job over these allegations.

“‘Food’s outside.’ I’m failing to understand why you wouldn’t tip her. She handled your food with care and knocked to let you know it was there,” one commenter wrote.

User @_9cubana8_ wrote, “[If] this goes viral you really gonna cost someone their job bc you wanted to start unnecessary bs.”

One commenter, who agreed that the dasher may have said “you’re so fat,” suggested that he may have put them up to it for TikTok.

User @ohhitsher_ wrote, “Dashers are given instructions on what to do when dropping off the food. I’ve seen cases where [customers] tell their dashers to say silly stuff when they knock.”

The Daily Dot reached out to Manubi via TikTok comment.

Update 1:09pm CT, Jan. 18: A DoorDash spokesperson told the Daily Dot in an emailed statement that the company is looking into the incident.

“Respect in our community is extremely important to us,” the spokesperson said. “We’re actively looking into this and will take appropriate action.”