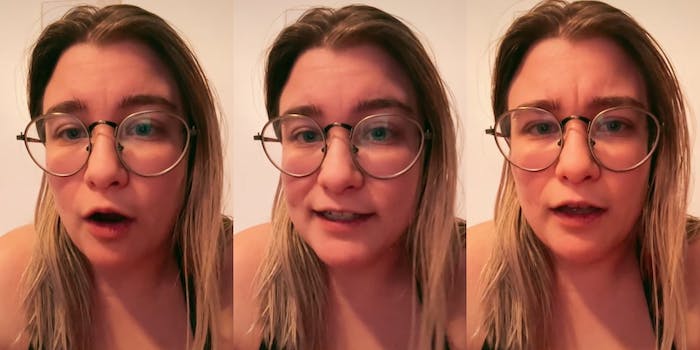 ‘There is no excuse’: TikToker says she got a DoorDash driver ‘deactivated’ after he ignored request for no-contact delivery, sparking debate

She said she requested no-contact because her boyfriend had COVID.

A woman on TikTok says she may have gotten a DoorDash driver deactivated “by accident” after she reported his service to DoorDash support.

The woman, known as Bailey (@bailesb12) on TikTok, recorded herself explaining the incident in a viral TikTok. The video received nearly 300,000 views and almost 900 comments by Thursday. Bailey has about 6,800 followers on the platform.

Bailey explained that ordered seven lemon-lime Gatorades and seven Vitaminwaters, which she acknowledged was “a lot” said she wanted her boyfriend to have enough to last a few days.

When Bailey got the notification that a driver had been assigned to her order, she messaged to say that her boyfriend had tested positive and couldn’t leave his house. She told the driver that if the store didn’t have 32-ounce lemon-lime Gatorades, it was “completely fine” if they got the 28-ounce bottles instead.

Bailey also specified to the driver that her boyfriend only drinks the acai blueberry pomegranate Vitaminwaters and requested that if the store didn’t have seven bottles, the driver pick up as many as they had.

“I’m super nice to delivery drivers, I’ve worked in customer service since I was 17 years old,” Bailey said in the video. “I’m nice to pretty much everybody that I talk to.”

The TikToker added that she apologized to the driver for the inconvenient order and thanked him for his service, but she said the driver was “so rude” in return.

In response to her message about the drinks and apologies for the inconvenience, the driver only messaged back “no lemon-lime,” Bailey said.

Bailey told the driver it was “totally fine,” and they could get orange or fruit punch-flavored Gatorade instead of the lemon-lime. She reminded him again to get as many Vitaminwaters as possible.

“Leaves me on read,” Bailey said of the driver.

After Bailey got a DoorDash notification that the driver was on the way to her boyfriend’s house, she got another notification that substitutions and refunds had been given. Her first thought was that the store didn’t have the Vitaminwaters, and the driver just hadn’t told her. But that wasn’t the case.

The worst part, Bailey said, was that the driver ignored her request to leave the order at the door without contact or knocking on the door. Since her boyfriend had COVID-19, she didn’t want to expose the driver to the virus.

“Me and my boyfriend don’t like to talk to anybody when it comes to delivery. We’re just like that,” Bailey said in the video. “We just tell them to leave it at the door, and most dashers, if not all, follow the instructions.”

This driver, however, knocked on the door and handed the order directly to Bailey’s boyfriend, she said. On top of that, Bailey claimed the bags “reeked” of cigarettes.

Bailey said she contacted DoorDash support and said that she didn’t want any refunds or credits—she just wanted somebody to hear her situation.

“And they said, ‘Well, he’s going to end up facing consequences,’ which makes me think he’s going to get deactivated,” Bailey said. “Oh my god, oh my god.”

Bailey’s story sparked a debate among viewers. Several TikTokers who say they’re DoorDashers chimed in to agree that Bailey’s driver deserves to be deactivated.

“Also a dasher here. There is no excuse to this guys behavior,” one viewer commented on the video. “Most of my orders are no contact and that’s fine with me. No excuses as to why he didn’t.”

In regard to the cigarette-smelling order, another alleged Dasher commented, “I smoke cigarettes, but I DO NOT SMOKE, while I have orders in my vehicle. If it says LEAVE AT DOOR, I legit have 0 problems with that!!”

Some viewers questioned why Bailey didn’t just bring the drinks to her boyfriend herself.

“As a young single mom… you should have just done it yourself,” one TikToker commented.

Bailey responded to the concern in a follow-up video. “It’s a completely valid question that you all asked,” she said.

The TikToker explained that she had been with her boyfriend all week right before he tested positive, so she was also quarantined separately for 10 days to make sure she didn’t expose anyone to the virus.

She said her mother had major heart surgery less than two weeks ago, so she definitely didn’t want her to get sick.

Bailey also shared that she had been in a bad car accident that totaled her car and almost killed her. Now, she doesn’t have a car and can’t deliver things to her boyfriend.

The Daily Dot’s reached out to Bailey via TikTok comment and to DoorDash via email.