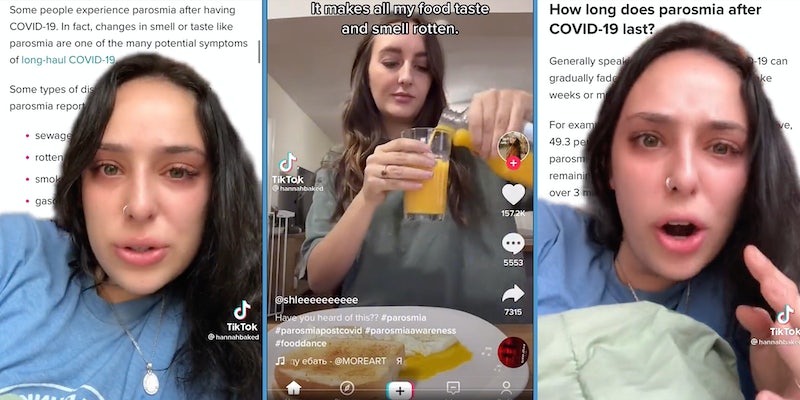 Some TikTokers who have previously had COVID-19 are reporting a distressing side effect: All of their food tastes like garbage. The phenomenon is called “parosmia.”

One story of living with the condition has recently gone viral, amassing over 2.5 million views on the platform. In the video, TikTok user Hannah (@hannahbaked) says parosmia has been affecting her for 10 months.

“I don’t think anyone understands how much this affects your daily life,” Hannah shares in the emotional video. “It’s not that just foods taste rotten. It is that, but it’s garbage, dude. It’s sewage. It’s gasoline. It’s ammonia… Imagine the worst smell that you have ever smelled in your life, and it’s that, but everything.”

She displays an article from Healthline that details just how widespread this issue is. According to a June survey referenced in the article, 10.8% of respondents reported parosmia symptoms after having COVID-19. With over 42 million cases of COVID-19 reported in the US alone, that would put the number of Americans who have dealt with COVID-19-related parosmia at over 4.5 million people.

Parosmia primarily affects smell, but as smell and taste are closely linked, it can have a profound impact on a sufferer’s sense of taste. Along with the tastes referenced in Hannah’s video, other people with parosmia have reported familiar foods suddenly tasting metallic, rotten, or skunk-like.

Health experts say people who suffer from parosmia will not deal with it for life; the Healthline article references a May 2021 survey that found parosmia lasted an average of 3.4 months.

However, that does not necessarily mean parosmia will be resolved within that time—or at all. Over half of respondents in the June survey said their parosmia did not abate after three months. In Hannah’s case, the condition has lasted almost a year

Doctors have warned her that if her condition lasts much longer, it might be permanent.

“I have two months left, and it’s not going away,” she says through tears.

Not much is known about how COVID-19 causes parosmia, but there are some overarching trends that might shed light on the issue.

In the limited data gathered about the topic, parosmia appears to primarily affect young people, with young women specifically suffering the most. A study of post-COVID-19 people who now have parosmia found that of its 268 respondents, 73.5% identified as female, and 70.1% were under the age of 30.

Given the study’s small sample size, it’s difficult to draw meaningful conclusions from this information.

In the meantime, some have devised their own rudimentary solutions to the issue. In another TikTok referenced by @hannahbaked, user @shleeeeeeeeee claims to have started eating meals while wearing a nose clip.

“By plugging my nose while I eat, it helps food taste a little more normal,” she explains.

As Hannah remarks, there is currently no cure for parosmia. In the meantime, however, people can make an effort to stop the spread of COVID-19, as @hannahbaked notes at the end of her video.

Neither Hannah nor user @shleeeeeeeeee immediately responded to the Daily Dot’s requests for comment.