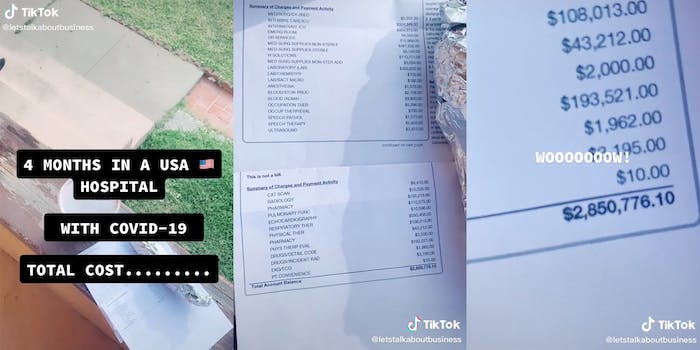 A TikTok video that has received more than 8 million views in less than 24 hours claims to show a staggering itemized document related to a COVID-19 hospital stay.

The video comes from the @letstalkaboutbusiness TikTok account, whose bio names them as Al. A caption hints that the video will reveal the total cost of “four months in a USA hospital with COVID-19.”

The TikToker promises a part 2 to the video in the comments that will show the itemized list with insurance figured in.

Commenters who saw the astonishing bill in the video weighed in with their takes on the state of American healthcare without waiting to see if the after-insurance totals.

One person wrote, “America truly is a third world country in a Gucci belt.”

Another asked, “Why do people think that one of the richest countries in the world can’t afford universal healthcare?”

Yet another opined, “They choose between having the greatest economy and having a good health system. As we can see, they chose the economy.”

One user wrote, “Proud to be Canadian,” alluding to Canada’s universal healthcare system.

Al noted almost immediately after putting the video up, “Honestly, this should be an advertisement for insurance.” A few hours later, the TikToker returned to the comments section on the video to write, “I’ll update everyone on the cost after insurance in my next post.”

Part 2 was yet to come as of Thursday evening, but one commenter is ready for what could possibly be coming next. “Start a GoFundMe,” the user wrote. “I will share and donate.”