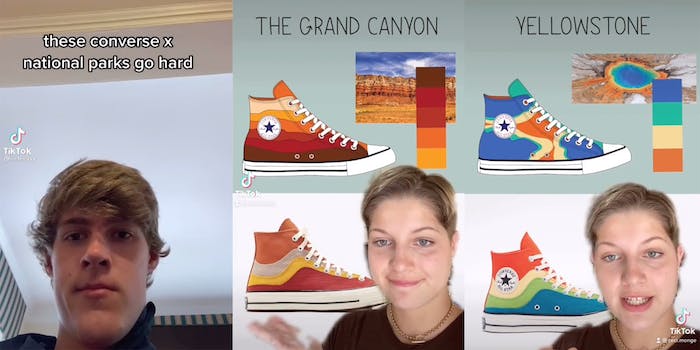 ‘I don’t think it’s a coincidence’: TikToker accuses Converse of stealing her designs

The sneaker company denies the claims.

A TikTok is accusing Converse of copying her designs for a set of National Park-themed sneakers she says she created when applying to the company’s design internship two years ago.

The TikToker and designer Cecilia Monge, @ceci.monge, explained that while it appears Converse liked her designs, she never heard back from the company and did not receive an internship offer.

Monge’s video, uploaded to TikTok on Saturday, has over 9.8 million views and 3 million likes.

After the video went viral on TikTok and Twitter, Converse responded that the the design was all its own and completed before Monge’s application.

“Converse takes our creative work seriously,” the company tweeted on Monday. “This concept and design was completed before we received this application. Converse does not shared unsolicited portfolios of job applications across the business.”

Converse said it shared the same statement directly with Monge. But Twitter users said the response was a copy-and-paste answer to the public outcry on social media following Monge’s videos.

“Yep there it is, the typical corporate statement. You guys really should at the very least compensate,” one user tweeted.

In Monge’s TikTok, the designer dueted a video in which another TikToker had originally shared Converse’s collaboration with the national parks. “These converse x national parks go hard,” the video reads.

“I got really excited about it, really wanted the internship so I went above and beyond and made a pitch sidedeck within my portfolio that I sent them for the application,” Monge says.

The first slide shows Monge’s design for Converse shows with colors and patterns inspired by the Grand Canyon. Her sketch and pitch displayed at the top of the screen include a color palette, mock-up shoe, and picture of the national park. Converse’s new shoe is pictured underneath.

“This is what I designed,” Monge says, gesturing to the top of the screen. “It is essentially the same. Didn’t get the internship. Never heard back from them and then saw this on the internet.”

“This is the second shoe that they released and I think it is also very interesting because the color palette is exactly the same to the one I sent them down to the order of the colors and the actual hues of the colors,” Monge said.

“Look at the yellows and the greens,” Monge says, pointing to the palette she created. “But yeah, I don’t think it’s a coincidence. It’s kind of just unfortunate when larger companies ‘borrow’ from smaller designers.”

Following the accusation, alarmed TikTokers tagged Converse in the comments, pleading with the company to give Monge credit and pay her for her design.

“Do better, @converse. So tired of big brands taking advantage of designers,” one user commented.

Some said the accusation made some question their loyalty to the sneaker brand. “If it makes u feel any better I would buy your design over converse any day!!” another user commented.

Monge posted a second TikTok to clarify the date and time she says she first uploaded the design in her internship application to Converse.

The video shows she submitted a PDF file on Nov. 24, 2019, with her national parks design pitch as Monge thanked users on TikTok for their support.

Monge and Converse did not immediately respond to the Daily Dot’s request for comment.