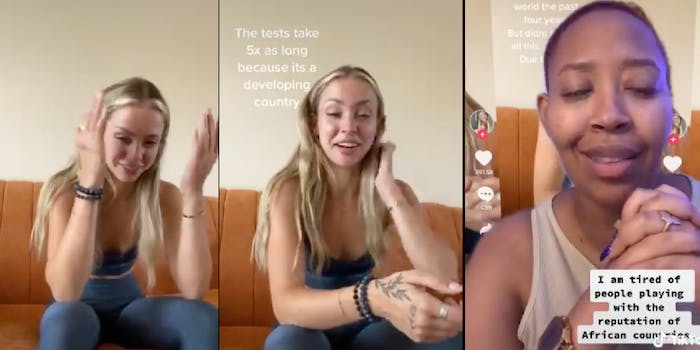 TikTok influencer freaks out after being quarantined in Rwanda

'You can take your white savior complex and your privilege elsewhere.'

The United States falls far behind the rest of the world in its coronavirus response. Rather than treat the root causes of this colossal failure, the U.S. government seems content on harboring a reality where the virus is our new normal, and it’s on citizens to adapt.

Such might explain why last week, influencer Charly Jordan jetted off to Rwanda to “do charity work with gorillas” but had a total meltdown when she was quarantined because she tested positive for COVID-19.

Jordan, who has close to 2 million followers on TikTok and 3.3 million on Instagram, arrived in Rwanda on Wednesday.

“Made it to Rwanda, and I couldn’t be more in love…I’m definitely Corona free haha … 100 temperature checks later,” she wrote in an Instagram post. On to save the gorillas she went, posting more content along the way like her dancing in front of a jeep with the caption: “peep my insta to see our trek into the Rwanda jungle to find silverback gorilla.”

But Jordan didn’t make it too far. Rwanda has stricter coronavirus testing policies than the U.S. ”Whenever someone is driving a vehicle, bicycle, motorcycle or even walking, everyone is asked if you wish to get tested,” said Sabin Nsanzimana, director general of the Rwanda Biomedical Center, in an interview with NPR.

Jordan was tested upon arriving in Rwanda. When she got her test results back a few days later, she posted a tearful video to TikTok. In the now-deleted clip, Jordan says she got “a hundred thousand tests” after having COVID-19 a few months ago and was told she couldn’t get sick again.

But Jordan says after she tested positive in Rwanda, the “fucking government” showed up and “dragged her away” from her fellow travelers. She also says since she doesn’t speak the language, she was locked in a room and forced to quarantine.

The public breakdown set social media ablaze with comments about Jordan’s white savior complex, but one video stood out for its concise critique. Zuba Mutesi, a local Rwandan TikToker explained just why Johnson’s actions were so offensive.

“I’m Rwandan and I’d like to highlight that we speak English, so that’s lie number one,” Mutesi says. She then explains her country’s coronavirus protocol, which is so extensive that it’s helped Rwanda become one of only 30 countries that’s “open with restrictions” to U.S. travelers, according to Vulture. She concludes with a mic drop.

“Second of all, you can take your white savior complex and your privilege elsewhere because we don’t need this type of charity if it’s going to come at the cost of you bad mouthing people who are literally protecting you from others because you’re now a danger,” she says.

Jordan issued a public apology across her social media accounts and four days later, the Rwandan government allowed her to leave the hotel room after officials determined that her first test had been a false positive.

Despite the education from Mustei, Johnson still shifted focus to the Rwandan government. “They were wrong this whole time. I can leave!” she said in a TikTok video.

Johson left Rwanda this past weekend. On Sunday, she apologized on Instagram for traveling during the pandemic. “I’m completely in the wrong for doing that, and I have learned my less one hundred percent,” she said.