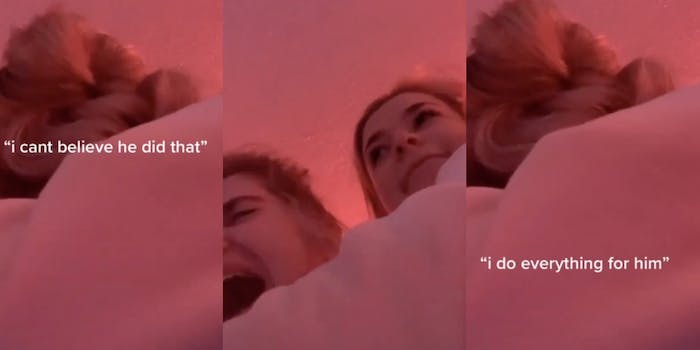 'I want people to understand what cheating can do to someone mentally.'

It hurts to be cheated on.

Eighteen-year-old Carlie Bradford wanted everyone to see just how devastating it can be, so she uploaded a TikTok video of her bawling her eyes out moments after finding out her boyfriend cheated on her.

In the video, Bradford breaks down as her roommate comforts her.

“I can’t believe he did that,” Bradford cries while cradled in her roommate’s arms.

The teen told BuzzFeed that she shared the video so others can witness how impactful cheating can be.

“I posted the video because I want people to understand what cheating can do to someone mentally,” Bradford told the publication. “I posted it also to let other people know that they’re not alone and that people are there for them if they ever go through what I did.”

TikTok users responded to Bradford’s video by urging people not to cheat on their partners.

Others responded with an outpouring of support.

“You deserve so much love and I’m so sorry this happened to you,” TikTok user @devils_baby.exe consolingly wrote.

It appears Bradford agrees that she should definitely be treated better and has since dumped the cheating boyfriend.