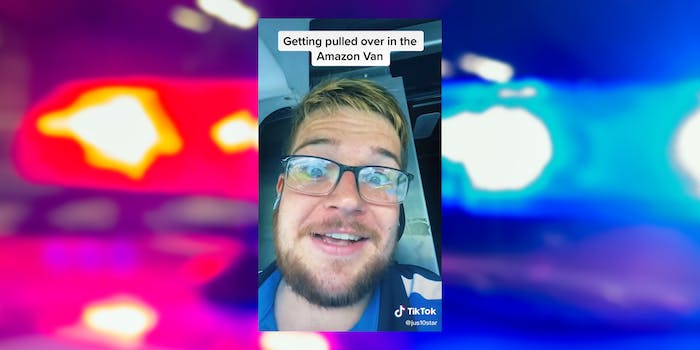 ‘Y’all giving me f*cking equipment that don’t have valid tags’: Delivery driver says he was pulled over in Amazon van for expired tags in viral TikTok

'I don't know what kind of f*cking sh*tty company you're working for.'

An Amazon delivery driver said in a viral TikTok video that he was pulled over by the police because the tags on the truck, which he was assigned by the company, were expired.

Earlier this month, Justin Baker (@jus10star) posted the clip and explained that a police officer made a U-turn and pulled Baker over while he was making deliveries. On Thursday, the TikTok had over 315,000 views.

“So listen your tags are two months expired on your truck. I’m not gonna cite you cause I know that’s not your truck,” Baker said the officer told him. “I don’t know what kind of fucking shitty company you’re working for having you out like that but they need to get that fixed.”

In the clip, Baker said that he called his Amazon dispatcher to tell him he “got pulled over by the police because y’all giving me fucked up equipment that don’t have valid tags.”

“Y’all giving me fucking equipment that don’t have valid tags,” Baker said. He explained that the dispatcher said they would let the company know they need to order some new ones.

“Y’all don’t have that already in a fucking file cabinet? It’s two months expired,” Baker said in the clip.

The TikToker wrote in the comments that Amazon delivery drivers are given a different van each day and are not allowed to mark it pre- or post-trip doing so “grounds the van.”

In the comments, some people said it was Baker’s fault for not checking the tags anyway. “My man you’re a commercial driver you may not see it but you are, that is your problem not Amazon,” one user wrote.

Others shared how they have had similar experience driving for work. “I got pulled over twice for expired tags in the company car and my boss did nothing until SHE got pulled over,” one person commented.

In 2018, an investigation by Insider revealed that many Amazon delivery drivers were using trucks from third-party courier companies that were “falling apart” with “bald tires,” “broken mirrors” and “messed-up doors.”

In its response to the investigation, Amazon said it would create a new program to “assist our small business partners scale” called the Delivery Service Partners program, which would ensure the trucks being used to make deliveries were up to quality. Technically, Amazon isn’t responsible for maintaining these vehicles. But there is a code of conduct to help make for a “safe and healthy work environment.”

The Daily Dot reached out to Baker via TikTok comment and Amazon via email.