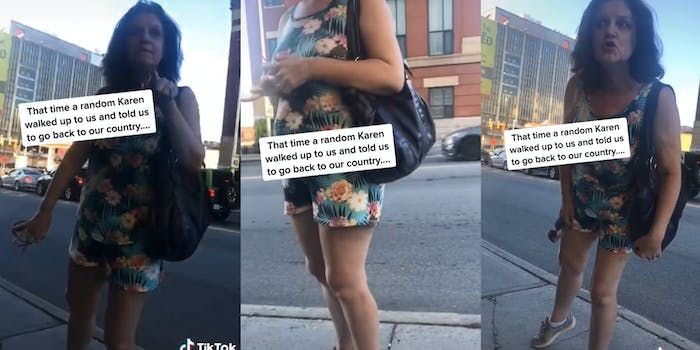 'We’re not gonna chalk racism off to mental illness.'

On Wednesday, Black TikToker @stella_bells_ posted a now-viral video that shows a white woman in Canada telling her to go back to her country. The Black woman who posted the video said in the comments that she is a Canadian immigrant.

In the video, @stella_bells_ calls the woman “insane” and “racist.” She also tells the woman that if she cannot find a job, it isn’t her fault.

In a second video, @stella_bells_ explains the incident further. She explains that the white woman, later dubbed a “Karen,” came up to her and her friend and asked where they were from.

The woman allegedly asked, “What are you doing here? Why don’t you go back to where you’re from because you guys are leeches and you’re sucking all of the money from the people who are actually meant to be here.”

The TikToker then says the woman told them that she has been looking for a job for the past 15 years.

The woman allegedly added, “Because of people like us [Black people], she’s unable to find a job and that she is frustrated about that.”

@stella_bells_ says that the woman called them other racial slurs in addition to “leeches.”

At the end of the video, @stella_bells_ says, “We’re not gonna chalk racism off to mental illness because they’re not linked and we’re not gonna start linking them today.”