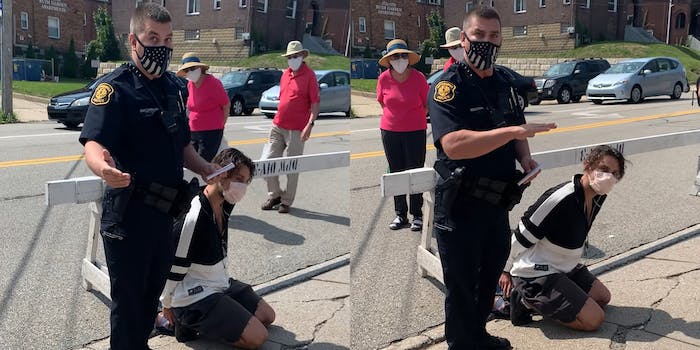 He confronted Pittsburgh police officer Paul Abel for his fashion.

In a bizarre freak-out on Sept. 6, a Pittsburgh police officer threatened to tase and then arrested a man over his “thin blue line” mask at a farmers’ market. The went viral on Reddit this week.

The video picks up after bystanders say a man asked the officer why he was wearing a mask with a “thin blue line,” which is associated with pro-police “Blue Lives Matter” social media. According to witnesses, he confronted officer Paul Abel over the mask and continued to approach the officer. Abel told him to move, the man refused, and the officer felt compelled to arrest the man.

In the video, the unidentified man says, “I didn’t do anything,” as the officer grabbed his shoulder. Then, the officer pulled out his taser, holds the man by the collar, shouting, “Turn around and put your hands behind your back!”

“OK, OK. My hands are behind my back, sir. I have not done anything. She has it on camera right here,” says the man.

“I don’t care,” replies the perturbed officer as he puts handcuffs on the man and subsequently demands the man to go to his knees while he calls in the arrest.

Abel requested identification from the man. However, when the man did not provide ID—not required under Pennsylvania law—Abel searched him anyway.

According to Pittsburgh City Paper, the man was charged with six misdemeanors, including resisting arrest, disorderly conduct, defiant trespass, and three counts of marijuana possession (after a subsequent search.) Per a Pittsburgh Post-Gazette report from 2008, Abel had already had a dozen charges of misconduct before the city’s Citizen Police Review Board.

Abel is spoken about as a widely known “bad apple” within the Pittsburgh police force on Twitter.

“Classic Paul Abel violating the rights of another citizen with another temper tantrum and unwarranted arrest,” tweeted @ZoffHans. “This guy needs to turn in his badge and get in an Anger Management program. What a poor excuse for a Public Servant and a disgrace to the Pittsburgh Police. Total jackass.”

Alex Osgood witnessed the 15-minute encounter and recorded the arrest. “I was kind of stunned, not surprised, but to witness it first hand,” Osgood told the City Paper. “The officer was being incredibly aggressive. He never said that he was under arrest or why.”