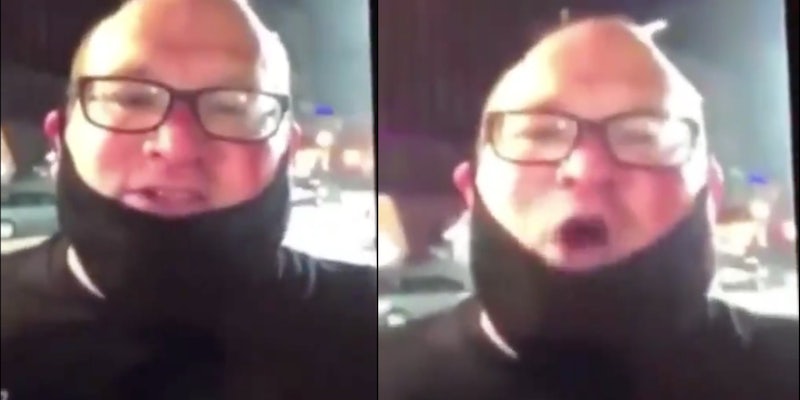 Steven Lysenko has been placed on leave.

Steven Lysenko, an assistant principal and teacher at an upstate high school, was reportedly placed on leave following his controversial attendance at a Black Lives Matter protest in Rochester, New York.

“Our peacekeepers ended up shooting pepper spray at us for singing and chanting and telling them what a shitty ass job they were doing,” he said, according to copies of the video that have gone viral online. “They can fuck right off, America.”

After his explicit tirade, Lysenko ended the video with a calm, polite “Thank you.”

The district apologized to students, parents, and the school community, stating the incident would be addressed in a “confidential, personnel matter.”

On Tuesday, the district announced Lysenko was placed on leave and that an investigation is underway. The district’s action, it noted, followed an “outpouring of emails, posts and comments regarding this matter.”

“While we respect and value individuals’ rights to free speech and due process, we must understand there may be consequences when our conduct disrupts our educational environment and impairs our schools’ operation,” an official said, per the New York Post.

Some Twitter users, who are calling for Lysenko to be fired, are urging others to make the video go viral and share it among conservative accounts.

On the other hand, more than 11,000 people signed a Change.org petition in support of Lysenko and his continued employment at the high school.

One Change.org user commented on the petition that “Steve Lysenko is the only admin at spencerport willing to stand up for what’s right. He was not in a teaching role during this video, and posted it to his private social media. Firing him will be telling students of color that you refuse to support one of the only people standing with them.”

The Daily Dot has reached out to Steven Lysenko.

Rochester has seen four nights of protests following the release of bodycam footage showing the arrest of Daniel Prude, a 41-year-old Black man who died in police custody after his arrest in March.